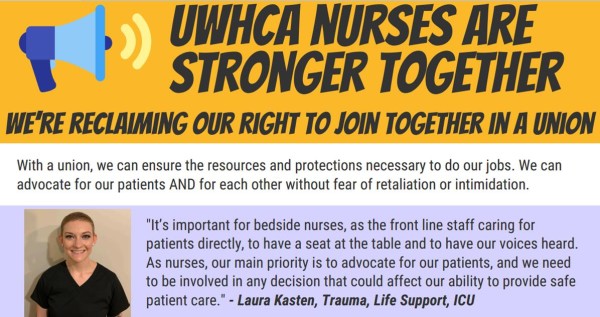 (MADISON, WISCONSIN) - Nurses at the University of Wisconsin Hospital and Clinics (UWHC) formally demanded that the UW Health Board voluntarily recognize their newly-formed Union.  The Nurses, who’d lost Union Representation after former Republican Governor Scott Walker unleashed a package of Anti-Labor Legislation in 2011, fought - and lost - the battle to retain their Union-won contracts in the years since.

The Wisconsin Nurses join the ranks of Health Care Professionals across the United States organizing for improved Staffing Ratios and safer work conditions at hospitals and clinics.

The Nurses, who’ve organized in response to chronic understaffing in the UW Health Care System, say that patient safety lies at the heart of their campaign - which was launched a year ago, and grew out of the public eye in the months since.

In 2019 alone, Nurses in Michigan, Montana, and Oregon have campaigned for Union Representation.  In each drive, Nurses placed patient outcomes squarely at the center of their campaign platforms and months of Strikes and Unionization Campaigns around the United States have demonstrated the power of organized Nurses to fight for working conditions on their own terms.

California remains the only state that mandates staffing minimums in hospitals and clinics, and Nurses’ Unions have backed similar legislation at the Federal level.

Kate Walton, a Registered Nurse (RN) in the emergency department at the UW Hospital, says Nurses are fighting for appropriate staffing ratios and that securing Union Recognition would be critical for a broader guarantee of safety for patients.

Unionization, Walton says, would preserve “the ability to speak up on behalf of our patients without fear of retaliation or concern that we’ll be punished.”

By negotiating with the hospital as a collective - rather than through individual channels within the UW’s Human Resources Department - the Nurses hope to avoid having to self-report safety concerns within the departments.

“We feel like without a voice we have lost some of the tools that we need to care for patients, especially with regard to our staffing ratios,” says Shari Signer, a UW Nurse of over a decade.

Nurse Unionists and advocates around the United States have charged that practices by their employers - like cutting budgets for Support Staff - are the product of an administrative attitude that prioritizes profit over safety, but the factors underlying the Union Push in Wisconsin provide a rare, and grim, illustration of the genesis of such Labor practices.

To Continue Reading This Labor News Report, Go To: https://progressive.org/dispatches/wisconsin-nurses-unionize-join-fight-against-corporatization-herman-191223/?fbclid=IwAR3ZwN8ExL2P5QGK7iGsxvwUhBHIqqs0wH5mY5HfqoEDJHgRFZjYtVZH_uU