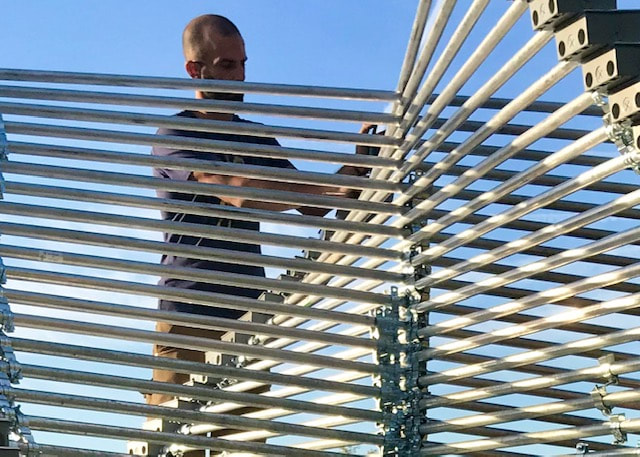 (NEW YORK CITY) - The metal crossbars shimmer as the solar-powered lights below them cut through the evening’s cold rain and fog.  Those crossbars, galvanized electrical conduit and aluminum tubing, twist upward in a double-helix pattern around a spine whose vertebrae are the conduit holders Electricians call “Mae Wests.”  The undulating outer edges are held together by staircases of gangboxes.  “It pops,” a Worker at Socrates Sculpture Park in Queens says as the lights come on at dusk.

International Brotherhood of Electrical Workers (IBEW) Local 3 Member Paul Vance was lead Artist.  Local 3 Members Lowely Cheung and Sue Sheinen, both former students in Cline’s public art classes, “contributed a lot of the crucial shoring up the structure and siting it in the park,” and the two women “spearheaded” having it illuminated by solar power.

The project was intended to show Workers’ “material intelligence,” their collective knowledge and teamwork, and seeing materials in a different way.

The networks of Conduit Electricians build on the job “can be really beautiful,” says Cline, but they’re usually covered up by walls.

The spiraling-ladder shape, the Workers Art Coalition says, was intended to evoke Sherry Arnstein’s Ladder of Citizen Participation, a 1969 guide to public voices in decision-making whose eight steps rise from “manipulation” to “citizen control.”

Vance had done a similarly shaped sculpture for a 2018 show on that theme at the Lower Side Side Art Space ABC No Rio.

Designing and building it involved creating something that would work as art, be emotionally accessible to the public, and be structurally sound and safe enough to be out in the open for six months.

They didn’t want it to be “Art with a capital A” isolated on a pedestal of reverence, says Cline, but they also didn’t want kids using it as a jungle gym.

“It’s ‘not about preciousness, it’s about safety,’” says Chris Zirbes, the Manager of the Socrates Park Studio where the sculpture was fabricated. “We don’t have guards like MOMA (at the Museum of Modern Art).”

They tested its durability, he says, by “getting four people to climb it at once.  ‘It didn’t break.’”

That was one place where the Workers’ and Park Staff’s experience came in, says Cline.

“They ‘know how to figure out and judge what works in that kind of public space,’” he said.

To Continue Reading This Labor News Story, Go To: http://laborpress.org/electricians-bring-muscle-memory-to-queens-sculpture-park/