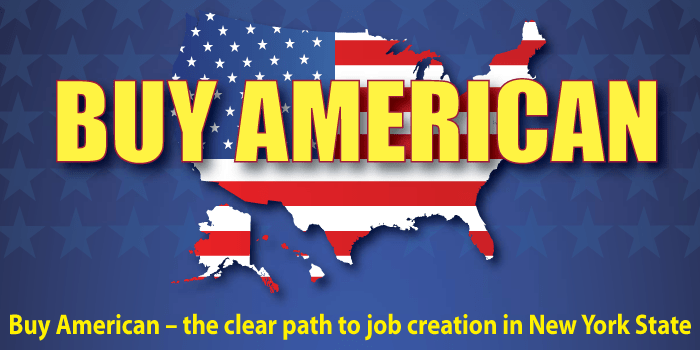 The Buy American Act requires all structural steel and structural iron used in all State road and bridge construction projects with contracts worth more than $1 million to be made in America.

The current law is set to expire April 2020 and making this law permanent will continue to require State agencies to use high-quality American-made structural iron and steel, creating Union jobs and helping ensure infrastructure projects last long into the future.

"No State in the country is building like New York.  Our Nation-leading, $150 billion infrastructure program is literally changing the face of the Empire State - and we have no intention of slowing down," Governor Cuomo said in a statement.

"Making the Buy American Act permanent will not only help ensure the safest, best quality steel and iron are being used in our infrastructure projects, it will also create even more jobs for New Yorkers and support our growing 21st Century economy," Cuomo said.

Since taking office, Cuomo has been committed to investing in New York State's infrastructure and workforce.

In December 2017, he signed the New York Buy American Act, which requires the Department of Transportation, Thruway Authority, Metropolitan Transportation Authority, Office of General Services, State University of New York (SUNY) Construction Fund and Dormitory Authority of the State of New York to include a contract provision requiring the use of American-made structural iron and structural steel for all surface road and bridge projects with contracts worth more than $1 million.

Building these projects with high-quality, safer steel made by American Workers has also helped in creating thousands of Union jobs and will help ensure these structures last long into the future, the Governor said.

To Continue Reading This Labor News Story, Go To: www.governor.ny.gov/news/governor-cuomo-unveils-12th-proposal-2020-state-state-making-new-york-buy-american-act?fbclid=IwAR0yEliSK2QIW9aUlJozF36pLaxvAYQXCtwbn5dejeDnWgxIvWWfbZA-RoM