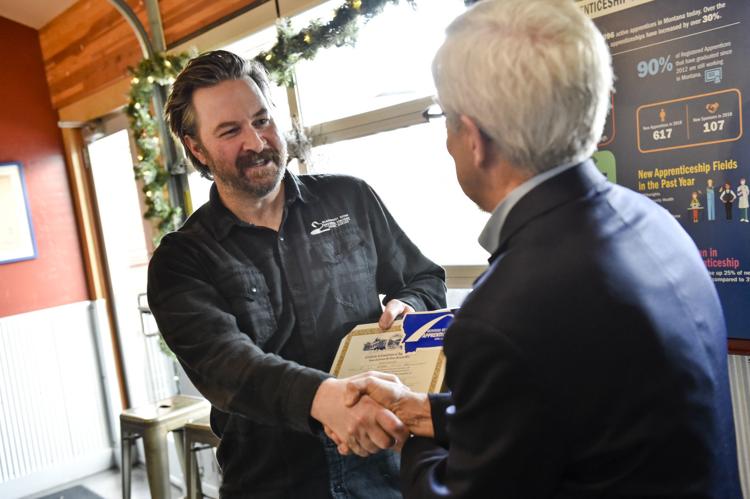 (HELENA, MONTANA) - To celebrate his graduation, Nicholas Balcken likely raised a glass - of Blackfoot River Brewing Company beer.  Balcken became the first participant in the Montana Registered Apprenticeship Program to receive a Professional Brewer Certificate.  With this credential, the Blackfoot River Brewing Company Employee said: “I hope to be able to develop better beers and improve my recipe development.”

Balcken has worked as a brewer for the past five and a half years.  Recently, he remembered, the Helena Brewery was having a hard time finding qualified candidates for an Assistant Brewer position.: “It’s such a fast-growing industry that we’re having to fill very highly skilled positions with people that we’re having to completely train from ground zero.”

The State of Montana’s Registered Apprenticeship Program partners with employers around the state to provide Workers with on-the-job training and industry-certified credentials.

Balcken said he and his colleagues originally looked at the program as a way to find better candidates, but then, he said: “I realized I could use it for myself.”

It also suited the goals of Tim Chisman, Blackfoot River’s Lead Brewer and Managing Partner: “For him, it’s a way for professional development and kind of a motivator to get further and for us, we think it’s an excellent way to retain Employees.”

Blackfoot River and the Montana Department of Labor and Industry jointly funded training for Balcken and his Co-Worker Brad Olson, who is still in the program.

It included 140 hours of on-line courses from the Institute of Brewing and Distilling and hands-on training designed by Chisman.

“We broke down every single part of a brewer’s job,” he said, “and said, ‘Okay, I think you’re going to need one thousand hours brewing (experience) before you're actually qualified.’  As an employer, that was the most intensive part, just building the plan.”

The state’s involvement “was in the setup and just monitoring along the way.”

They developed a 4,000-hour course - equivalent to two years of full-time work - and launched it in July 2018.

“The whole thing was completely tailored to our business,” Chisman said. “For instance, we’re a draft-only brewery, so bottling or canning was not part of our course.”

As Balcken, who had already worked at Blackfoot River for three years, started with some credit. He said the experience increased his knowledge of “the biology behind brewing, yeast management, how yeast works, and also the bad stuff (like) bacteria (and) wild yeast - stuff that you just don’t learn on the job until something bad happens.  ‘It was very beneficial to me.’  It ‘gives me more confidence moving forward.”’

Chisman and Matt Leow of the Montana Brewers’ Association said they had already heard interest in new Apprenticeships from other breweries, including Bayern Brewing in Missoula and Kalispell Brewing Company.

“We want to continue to make the best beer in the country as a state,” Chisman said, “and I think the more educated our brewers can get, the better off we’re all going to be.”

To Directly Access This Labor News Story, Go To: missoulian.com.