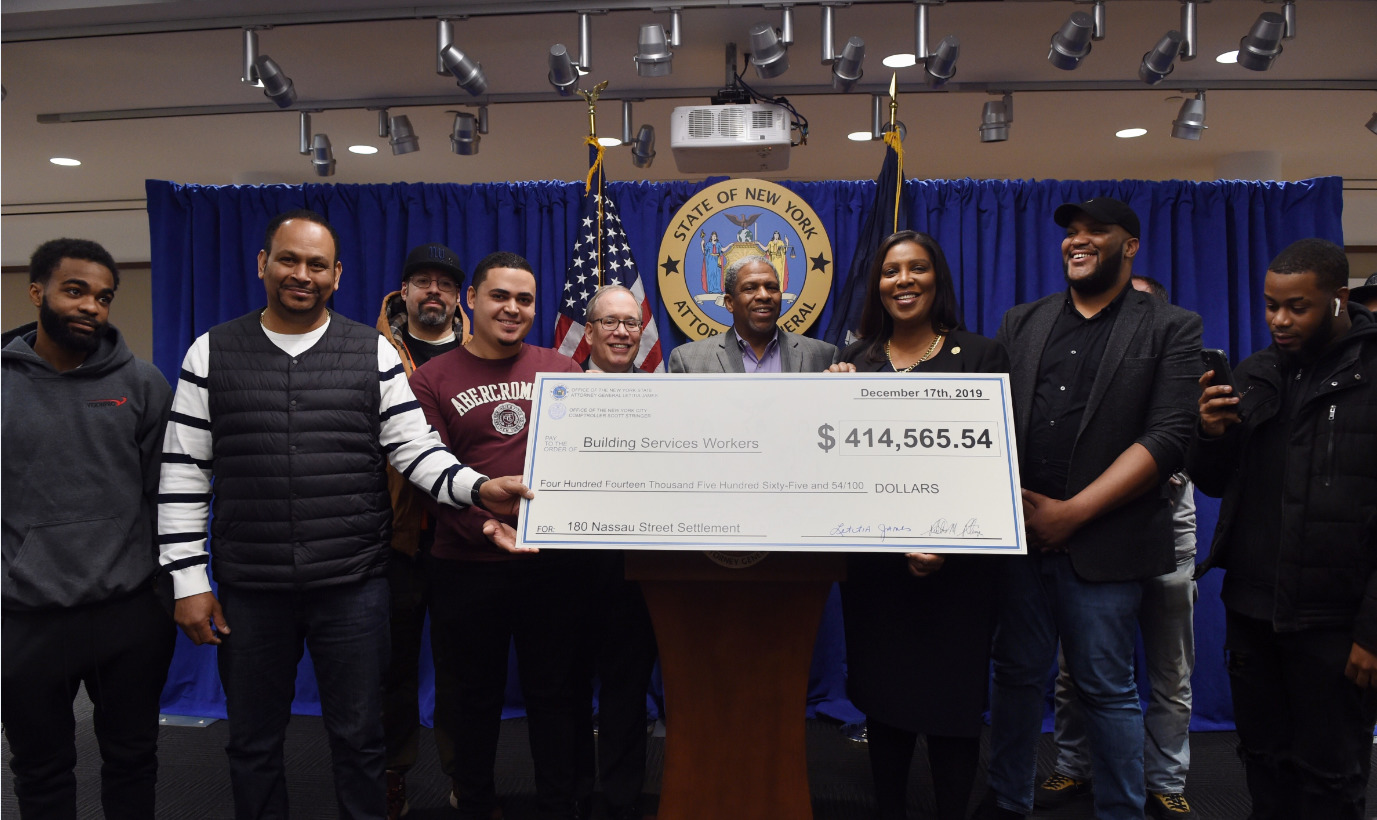 “There is ‘zero tolerance for cheating Workers out of their hard-earned pay,’” Attorney General James said. “As a result of our investigation, we were able to secure hundreds of thousands of dollars for these Workers – ‘payment that they should have received long ago.’  I thank Comptroller Stringer and 32BJ for their partnership ‘in holding these bad actors accountable and ensuring that our Workers get the pay they deserve.’”

The settlement, which provided recompense for the Building Service Employees, was approved by the New York City Department of Housing Preservation and Development (HPD), which administers the Tax Exemption Program in the City of New York.

“In New York City, the ‘dignity of work matters and we will never stand idle when hard-working New Yorkers are exploited or underpaid,’” said Comptroller Stringer. “These 32BJ SEIU Members ‘received the wages they earned and the justice they deserve — and we’re sending a clear message to unscrupulous developers, contractors and landlords that they better follow the rules when they get millions of dollars in property tax breaks.’  I am proud of the collaborative effort between my office, the Attorney General’s Office, HPD and 32 BJ SEIU, ‘which allowed us to recover these wages and put them back where they belong - in the hands of working New Yorkers to provide for their families, just in time for the holidays.’”

A joint investigation conducted by the Office of the New York Attorney General and the Office of the New York City Comptroller revealed that, in 2014, defendant Mica Gabe fraudulently induced the New York City Department of Housing Preservation and Development (HPD) to issue a Section 421-a Partial Tax Exemption for the Brooklyn property, based on Mica Gabe’s false assurance that Building Service Employees would be paid Prevailing Wages, but the two defendants failed to pay the applicable wages to Employees between August 2014 and March 2016.

In fact, less than two weeks after certifying to HPD that they would pay the Building Service Employees Prevailing Wages, Mica Gabe began hiring Doormen, Porters and a Superintendent for the 180 Nassau Street property and paying them wages lower than required by law.

32BJ SEIU President Kyle Bragg said: “Attorney General James, Comptroller Stringer, ‘we thank you for upholding the law on behalf of working New Yorkers.’  This is a ‘huge’ victory, ‘not only for’ the hard-working men and women who have kept Brooklyn Warehouse ‘clean, safe and functioning for tenants but also for the families and communities that rely on them.’  The back wages ‘will help’ Brooklyn Warehouse’s concierge, Superintendent, Doormen, Porters and other Building Service Workers ‘get back on their feet after being grossly underpaid.’  This ‘also sends a clear message to employers across the city that Workers’ wages and benefits must be paid properly.’  ‘It’s not an option to break the law at the expense of Working People in our state.’”

To Directly Access This Labor News Story, Go To: http://laborpress.org/ag-james-comptroller-stringer-and-32bj-president-bragg-return-more-than-400000-in-recovered-wages-to-underpaid-building-service-workers/