Despite Protests, Rochester School Board Sets The Layoff Of More Than 1,000 Teachers To Take Place On January 1st 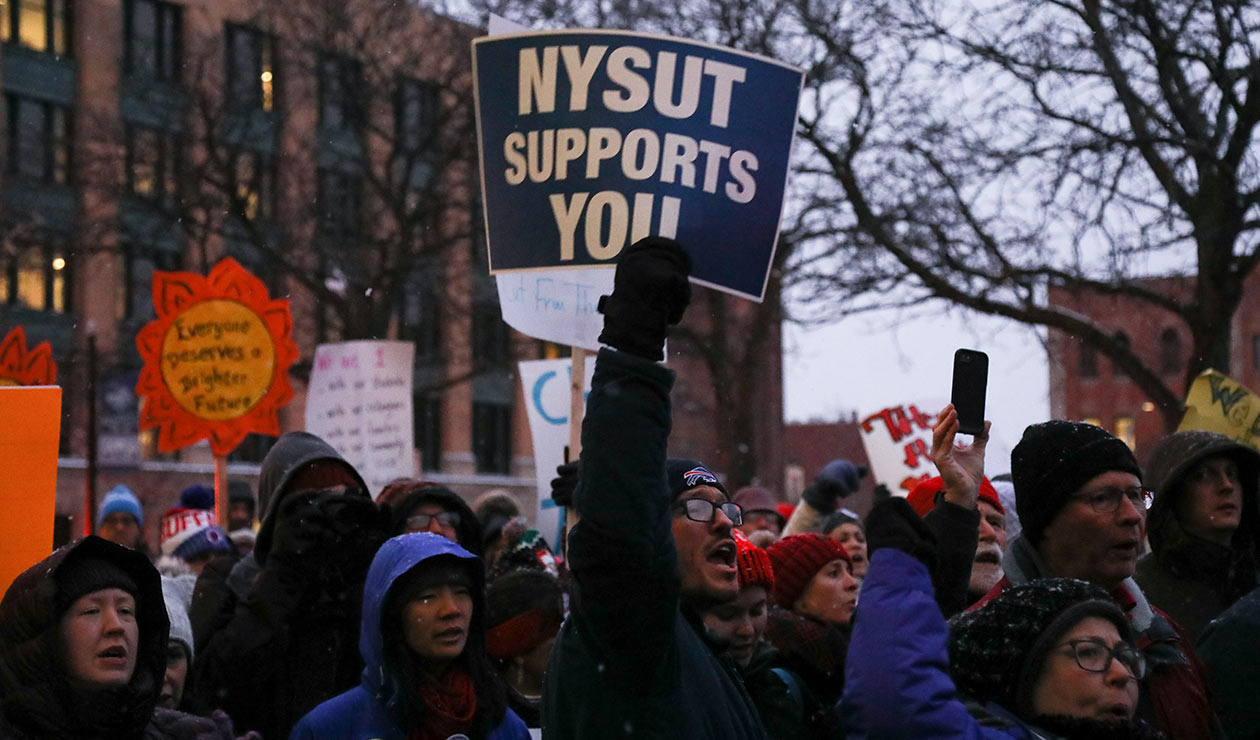 (ROCHESTER, NEW YORK) - More than 1,000 Rochester Teachers, parents and students showed up at Thursday’s (December 19th) “Rally to Spare Our Students” and the City School Board meeting to demand that the board reject the superintendent’s ill-conceived plan for disruptive mid-year cuts.

As dusk fell, Local Union Presidents Adam Urbanski of the Rochester Teachers Association (RTA) and Angie Rivera of the Rochester Association of Paraprofessionals (RAP), stood on a soapbox in a light snowfall to announce that the projected layoffs had been reduced significantly.

Hundreds of pickets on Broad Street outside the Rochester City School District building howled with hope - but they wanted even more.

At the end of the night, after hearing testimony from 92 people, all of whom pleaded for a reprieve, the School Board voted to enact the proposed mid-year cuts that New York State United Teachers (NYSUT) President Andy Pallotta labeled “a disaster” and “a national disgrace.”

While the Union and community protest significantly reduced the number of layoffs, the School Board approved 155 layoffs, including 109 Teachers and 10 Para-Professionals, effective January 1st.

When the final vote was cast, emotional Educators erupted in outrage.

They hugged and cried and disrupted the rest of the meeting as they made their way to the exits.

“It’s ‘shameful’ what this Board did tonight,” Urbanski said outside the room. “Absolutely ‘shameful.’  ‘There is no reason to have confidence in this Board of Education or in this superintendent.’  ‘They had time.’  Christmas break is coming.  ‘We could have worked together to try to work something out.’  ‘We didn’t break off’ discussions and the legislature ‘is not coming back into session until January.’”

If the Board waited, Urbanski said, the New York State Legislature could have taken action to resolve the budget deficit and that the School Board should have waited until the end of the school year to enact brutal layoffs and reduction in services.

“There was the opportunity to do all that,” he said, “and to make cuts to this central office, which this superintendent ‘refuses to make, and this board is too scared to stand up to him.’”

Pallotta said NYSUT and the RTA and RAP would hold a special event in Albany on January 14th to highlight the plight of the Rochester School District.

Earlier, he told the Board that if the state had met its obligation to provide $85 million in Foundation Aid to RCSD, this would never have happened.

Ever since the layoffs were proposed several weeks ago, RTA and RAP members told the district that cutting Teachers and Support Staff would disrupt the relationships they’ve built with their students.

To Continue Reading This Labor News Story, Go To: www.nysut.org/news/2019/december/heartless-school-board-breaks-a-citys-heart