Think Theres No Opportunity For Women In The Building Trades? Then Think Again - Bridge Crew Gets The Job Done With A Lot Of Woman Power 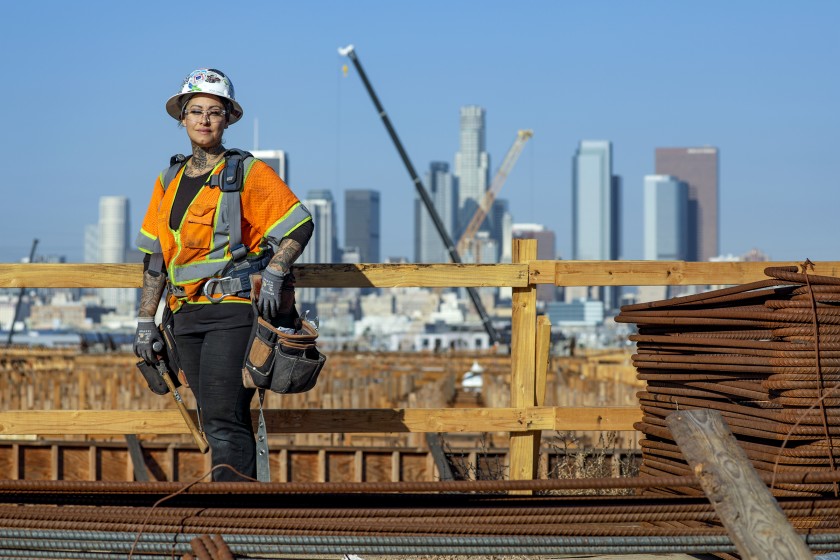 (LOS ANGELES, CALIFORNIA) - Maria Coronado has building in her blood.

Her Grandmother was a World War II Riveter and her Grandfather a life-long Woodworker.

Coronado, who grew up learning how to bake bread as skillfully as she knew how to fix a combustion engine, was often the only Woman on a site to wield a hammer when she started in construction in 1990.

That includes a group of Women rebuilding Downtown Los Angeles’ 6th Street Bridge - a once iconic landmark stretching across the L.A. River that was torn down in 2016 after it was deemed an earthquake hazard.

“What I’m always telling them is to ‘own your skills,’” said Coronado, 52. “Outshine everybody.”

The 6th Street Bridge team of 170 includes 15 Women - the most on any commercial project in Los Angeles and nearly double the Department of Labor’s participation goal of 6.9% Female Crew Members.

The $428-million project is being constructed by Swedish Construction Company Skanska, in a joint venture with San Francisco-based Stacy and Witbeck.

Skanska includes a Senior Executive Team that is half Women.

“There’s been jobs where there’s been ‘eight hundred guys and one’ female – ‘and I’ve been the only’ female,” the mother of four said. “This is the ‘first’ project ‘that I walked on to where I couldn’t believe how many Women I saw.’”

Garcia had spent years working in retail before picking up a hammer four years ago.

While going through a divorce, she learned of a Pre-Apprenticeship Recruitment Program called Bridging Outstanding Opportunities with Tradeswoman Skills, or BOOTS.

The training, in partnership with the Southwest Regional Council of Carpenters Union, is designed to prepare Women for a career in carpentry.

Coronado, a Special Representative with the Carpenters Union and the first female lead of a Local Union in a major metropolitan city, taught Garcia to “check her feelings” before she entered the construction zone, where orders are barked and words are rarely minced.

“You ‘have to have a voice’ when you’re in construction,” Coronado said. “You ‘have to communicate.’  ‘It’s a life-or-death situation sometimes.’  ‘You have to say what needs to be said without fear of consequences.’”

According to the Bureau of Labor Statistics (BLS), the construction industry is composed of roughly 9% Women, including those in Clerical and Administrative Roles - not in the field.

That statistic is lower for those who actually work on active job sites: about 3.4%.

To Continue Reading This Labor News Story, Go To: www.latimes.com/california/story/2019-11-30/6th-street-bridge-crew-gets-the-job-done-with-a-lot-of-woman-power?fbclid=IwAR1kZmajsKJEjGAPdSuAkyuWLhvDF-h_ZWpq0cOjU_jGQ0gIR3uq16UB5d0