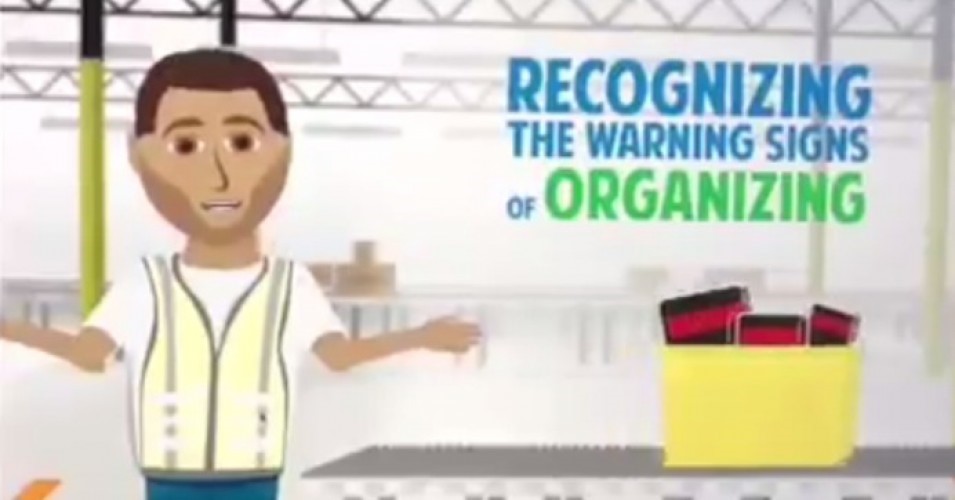 As Amazon works to combat its public image as a starvation-wage employer by doling out mere pennies in pay hikes and deploying an army of Workers to sing the company's praises on Twitter, a leaked video reveals the trillion-dollar company is continuing to work feverishly behind the scenes to crush any attempts by Workers to Unionize and bargain collectively for better wages and working conditions.

The 45-minute training video - which, according to Gizmodo, which was just sent to managers of the Amazon-owned Whole Foods - instructs company leaders on how to detect "early warning signs of potential organizing," which include Workers "suddenly hanging out together" and using "Union words" like "Living Wage."

In a tweet responding to the video, the National AFL-CIO wrote: "We like those 'Union Words' which gave us a Middle Class.  Shame Amazon.”

While warning managers not to openly threaten Workers who they believe are engaged in organizing efforts, the video encourages company leaders to give their "opinions" on Unionization.

"Opinions can be mild, like, 'I'd rather work with associates directly,' or strong: 'Unions are lying, cheating rats.' The law protects both!" the video says.

"We are not Anti-Union," the video's narrator goes on to say, "but we are not neutral either."

Amazon's aggressively Anti-Union video - which recommends tactics that one commentator said "should be illegal" - was sent to Whole Foods managers just weeks after Employees of the grocery chain took initial steps toward Unionizing in an effort to achieve a higher minimum wage and better benefits.

The training video emerged as Amazon and company CEO Jeff Bezos - the richest man in the world - have faced intense scrutiny from progressive lawmakers like U.S. Senator Bernie Sanders (Independent-Vermont), who last month introduced the "Stop BEZOS Act," which would impose a "100% tax on large employers equal to the amount of Federal Benefits received by their low-wage Workers."

"While Mr. Bezos is worth $155 billion and while his wealth has increased $260 million every single day this year, he continues to pay many Amazon Employees wages that are so low that they are forced to depend on taxpayer-funded programs such as food stamps, Medicaid, and subsidized housing just to get by," Sanders said in a statement.

In what one Amazon Employee described as a "damage control" effort, the company has reportedly begun handing out wage increases of 25 to 55 cents an hour to Workers around the country following increased criticism from Sanders and other lawmakers.

Responding to these meager wage hikes in a tweet, Sanders wrote: "Jeff Bezos is the wealthiest person in the world.  It is not enough for him to offer 25 cents-an-hour wage increases to Employees making grossly inadequate wages.  There is no reason why Bezos and Amazon cannot pay workers $15 an hour plus decent benefits."

"Jeff Bezos is a villain, plain and simple," Splinter's Hamilton Nolan wrote in response to Amazon's Anti-Union Training Video. "His insane fortune is the grotesque manifestation of workplace oppression."

To Directly Access This Labor News Story, Go To: www.commondreams.org/news/2018/09/27/unions-are-lying-cheating-rats-leaked-video-reveals-amazons-belligerent-anti-worker?utm_campaign=shareaholic&utm_medium=referral&utm_source=facebook&fbclid=IwAR1gUSSHY19tVJGbd2ohDv2wyTbxTRzyUbtrEwUByJvhCD4jpdKKC-UALWk