Want A Raise? Then Join A Union Because The Typical Union Worker Makes 27% More Than The Non-Union Worker 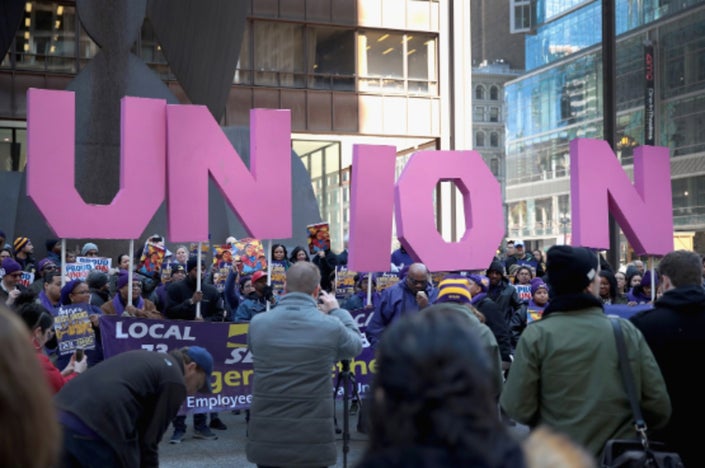 The typical Union Worker made $970 a week in 2014, compared to $763 for Non-Union Workers, according to the latest Bureau of Labor Statistics (BLS) data.

That 27% spread has remained relatively constant at least since 2000, when the agency started tracking the data.

To be sure, not everyone wants to be in a Union Contract, which dictates many work rules in addition to pay.

Some prefer to bargain individually for their wage and annual raises.

Bus Drivers for Facebook, who voted to join a Union in November, are among the latest to see a collective bargaining boost.  They just approved their first contract, which would increase their wages by an average of $5 an hour, according to a Union Official.  Under the new contract, base wages would increase to between $21 and $25, compared to an average of $17.93 previously.

"You are ‘better off’ in a Union job ‘because there you get to bargain for better wages,’" said Sylvia Allegretto, Co-Director of the Center on Wage and Employment Dynamics at the University of California, Berkeley

Being a Union Member, however, doesn't mean your pay will increase at a faster rate.

Also, bowing to corporate pressure, some Unions are now negotiating tiered wage scales so that new Employees are paid less than their experienced brethren.

It's hard for Unions to escape the wage squeeze that many American Workers are facing.

They must still contend with the same issues, including global competition and automation.

To Read This Labor News Story In Its Entirety, Go To: https://money.cnn.com/2015/02/24/news/economy/union-wages/index.html?fbclid=IwAR1JxXEmKDoSDM1kKZIIkUtgFb1jPgeBjgrKpaY8rNpLw_gaGrbdFmoJ1W8