The Story Of Labor In New York & What It Requires Of Us - City Of Workers, City Of Struggle At The Museum Of The City Of New York Tracks The Evolution Of The Labor Movement As An Unpredictable Passage Of Pitfalls & Switchbacks 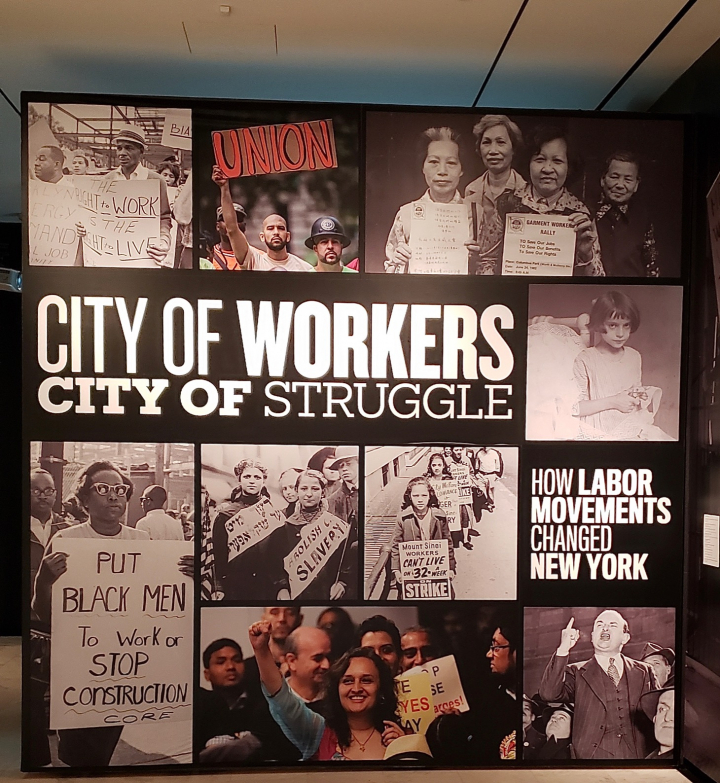 (NEW YORK CITY) - The art exhibition City of Workers, City of Struggle: How Labor Movements Changed New York, mounted at the Museum of the City of New York, does almost everything it needs to do in telling the story of a critical mass movement that micro-cosmically mirrors the large forces that have shaped the Nation’s Economic and Political History.

This story is told through a variety of media: Photographs; Wood Engravings; Lithographs; and Digital Reproductions, plus a host of pieces of material culture.

Because of the complexity of this saga, there’s also a good deal of reading to do here.

The show provides a wealth of didactic information breaking down into discrete themes (such as “Workers and Racism,” “Red Scare,” “Disaster and Ferment”) what might have been a tedious lock-step march through a chronology of the development of Labor Movements in New York.

To my eyes, all of it is fascinating, especially the pointedly contemporary viewpoint taken by the author of the majority of the wall texts and captions, the show’s curator - Steven H. Jaffe.

This perspective is sensitive to the plights of those typically ignored by canonized historical accounts: Women; African-Americans; Non-English speaking people; Non-European Immigrants; and the Poor.

Instead, the first wall text encountered positively declares: “In Unions There Is Strength.”

But the show doesn’t just rely on platitudes, it breaks down all the convoluted and contrary forces and factions that made the Labor Movement from the early 19th Century through now.

Much of this I did not know.

I discover that in the 1820s and ’30s, a cadre of Master Artisans who trained Journeymen for in-demand manufacturing skills (millinery, plumbing, clothing design and production, etc.) resisted what they called “wage slavery” - which was the prospect of being hired on as a salaried Worker in a factory.

At the same time, some of these Masters turned their workshops into factories that paid regular wages to Workers for an emerging mass market, rather than training them to become their own potential independent business owners.

This historical vignette demonstrates that in these early stages of industrialized production, there was a rapaciousness to the supposedly entrepreneurial spirit, which ultimately disadvantaged many to benefit a few.

The conditions of factory work, with its low pay and agonizingly long hours, spurred the creation of several Unions that were short lived in the mid-19th Century.

And though many Wage Laborers desired Unions to protect them from the schemes of mercenary and pitiless employers, competition among the various ethnic and gender groups complicated the effort.

In fact, Unions began to cohere around a male, European-American profile, thus both demonstrating the need for Worker Alliances and forcing those left out to form alternative ones.

To Continue Reading This Labor News Report, Go To: https://hyperallergic.com/515695/city-of-workers-city-of-struggle/

And For More, Read The Labor News Story, Headlined: Workers’ Metropolis “City of Workers, City of Struggle” at the Museum of the City of New York At www.thenation.com/article/mcny-city-of-workers-show-review/