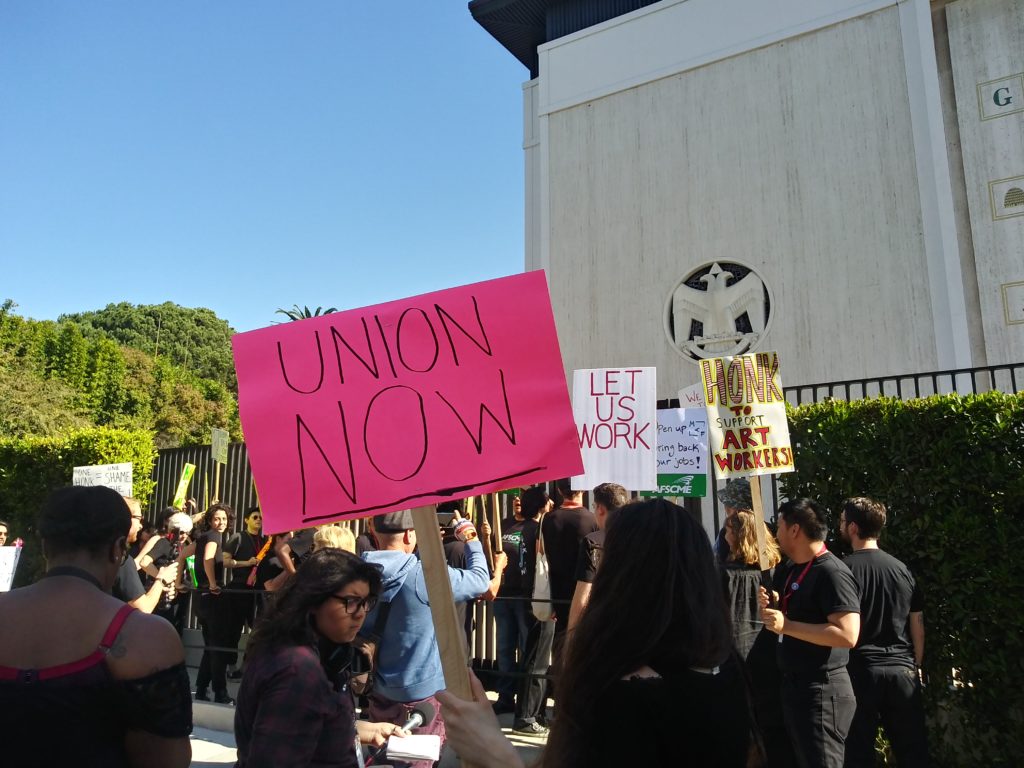 (LOS ANGELES, CALIFORNIA) - “Let us in! Let us in!” chanted a small crowd of Visitor Services Associates who were dressed in black as they stood at the locked gate of the Marciano Art Foundation (MAF) in Los Angeles in early November, at the time the museum normally would have opened to the public.  Just days earlier, the austere contemporary art foundation had closed abruptly - less than a week after the Visitor Services Associates announced their plan to Unionize.

The foundation, a private non-profit opened in early 2017 by the two art-collecting brothers behind the denim brand Guess, initially released a statement saying they were “supportive of all recommendations to improve the workplace.”

But several days later, the administration sent out an e-mail with a very different message: they would be “laying off all Visitor Service Associates” and closing the current exhibition nearly one month early due to “low attendance.”

After filing a complaint with the National Labor Relations Board (NLRB), the just-formed Union returned to their former workplace with colorful signs.  “We want to work!” they chanted forcefully at the locked gate.

The Employees knew, as they moved to Unionize, that they were part of a bigger, industry-wide conversation.

The New Museum, the Solomon R. Guggenheim Museum, the Museum of Tolerance in Los Angeles, and the Frye Art Museum in Seattle have all formed Unions this year.

And the tide doesn’t seem to be slowing.

The forces driving this push - ranging from a mandate to diversify Staff to the rising cost of living in urban centers - are not necessarily specific to the art world.

Similar efforts have rippled through higher education, as Adjunct Professors organize, and across the publishing industry.

To Continue Reading This Labor News Story, Go To: https://news.artnet.com/market/union-museum-analysis-1714716?fbclid=IwAR3bMX0z-iJUPli-kDxxKuTeOJ2qD6LRSUNoCp7azpgVWC57KCqvoP2bwaw