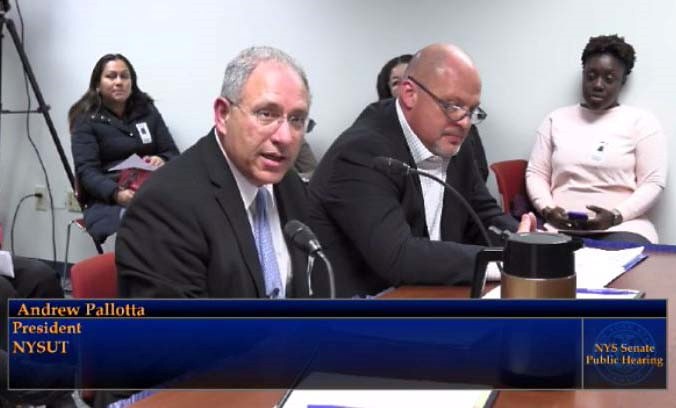 (NEW YORK CITY) - The New York State United Teachers (NYSUT) is calling on the state to fully fund the Foundation Aid formula and provide the $3.4 billion in aid owed to schools statewide as part of testimony during a state Senate public hearing on Foundation Aid that was held in Manhattan.

NYSUT President Andy Pallotta testified that while the Union believes the formula should remain the underpinning of school aid policy in New York, due to a lack of funding it does not currently support or respond to the needs of students, educators and school districts.

“Our students ‘don’t get a do-over,’” Pallotta said. “Fully funding Foundation Aid ‘is the difference between offering our students high-quality core subjects and enriching courses like art and music, and struggling to meet the constitutional requirement to provide a sound, basic education.’  ‘This is about justice for our students and addressing the inequality that exists in our education system.’”

Of the total amount owed, two-thirds, or $2.3 billion, is owed to high-need districts.

At the same time, the numbers of English language learners, students in poverty and students with disabilities in schools across New York have increased over the past decade.

Underfunding and increased needs have resulted in varying issues for school districts.

For example, in Yonkers, where schools are owed $38 million in Foundation Aid, the district has just one Social Worker for every 1,900 students.

Meanwhile in Buffalo, which is owed $76 million in Foundation Aid, Union Leaders report insufficient staffing, long delays in providing services to students with disabilities, and a lack of music and art classes.

Recent increases in Foundation Aid have barely made a dent in the total amount owed.

If state budgets continue paying down the amount owed at that rate, NYSUT estimates it will take 25 years to fully fund the Foundation Aid formula.

NYSUT and its partners on the New York State Educational Conference Board recently called for a total $2.1 billion increase in state aid to education in 2020–21, including $1.6 billion through Foundation Aid and full funding for expense-based reimbursements just to continue current services for students.

The ECB is recommending a three-year phase-in of the Foundation Aid owed to schools.

NYSUT, which represents more than 600,000 Members in Education, Human Services and Health Care, is affiliated with the American Federation of Teachers (AFT), the National Education Association (NEA) and the AFL-CIO.

To Directly Access This Labor News Story, Go To: www.nysut.org/news/2019/december/nysut-calls-for-full-funding-of-foundation-aid-formula