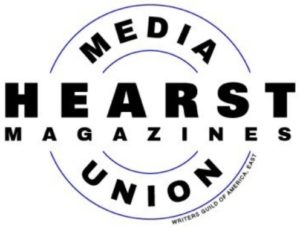 (NEW YORK CITY) - Hearst Magazines’ Editorial, Video, Design, Photo and Social Staff across 24 digital/print brands has announced it has Unionized with the Writers Guild of America, East (WGAE).  A strong majority of the 500-Member Staff had signed Union Cards with their goal of addressing diversity, transparency, compensation and editorial standards.

“The Staff at Hearst has demonstrated ‘there is always power in a Union,’” said Lowell Peterson, Executive Director of the Writers Guild of America, East. “Hearst’s Union Drive comes as the media industry continues to consolidate, as companies become platform-agnostic and offer content on paper, over the airwaves, and on-line.  ‘We are proud and pleased to build the movement for collective bargaining for the Professional Storytellers at Hearst.’  Unionizing, ‘winning’ recognition, bargaining contracts – ‘this is how people who craft content ensure that their voices are heard and their workplace needs are met.’”

WGAE, which represents Writers in film, television, news and new media, negotiates and administers contracts that protect the creative and economic rights of its Members, conducts programs, seminars and events on issues of interest to Writers and presents Writers’ views to various bodies of government.