We Are Not Robots! - Amazon Hit By Black Friday Strikes & Protests Across Europe As Part Of Long-Running Battle For Better Pay & Working Conditions 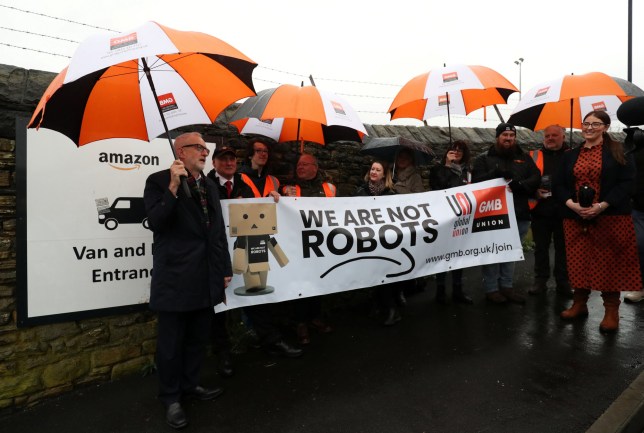 (ACROSS EUROPE) - Amazon was targeted by a United Kingdom-wide protest organized to coincide with Black Friday and Cyber Monday - demanding an end to appalling working conditions.  In another blow, hundreds of Amazon Employees at its distribution centers across Germany walked out amid a long-simmering battle for better pay.

Trade Union GMB coordinated the British demonstrations to take place across two of the busiest shopping days of the year.  “Workers are breaking bones, being knocked unconscious and being taken away in ambulances’” GMB National Officer Mick Rix said in a statement. ‘Amazon has spent a fortune on fluffy adverts saying what a great place it is to work.  Why not spend the money making their warehouses less dangerous places to work?”

The Union cited figures suggesting there had been more than 600 ambulance call-outs to Amazon Warehouses over a three-year period and just as many serious incidents reported to the Health and Safety Executive for various injuries.  They also claimed Workers had to urinate in water bottles and said there had been at least one report of a lost pregnancy, Yahoo! reported.

The Union called on Amazon to make their warehouses “less dangerous places to work,” but an Amazon spokesperson responded with charges those elected officials who were speaking out were “self-interested critics” with “a vested interest in spreading misinformation.”

In Germany, Amazon Workers in Germany also marked Black Friday by going out on Strike for better pay. The Union ver.di said the walkouts would affect six distribution centers across the country, with some due to last until Tuesday (December 2nd).

And For More, Read The Labor News Story Headlined: 2,200 German Amazon Workers Go On Strike At The Start Of Black Friday As Part Of Long-Running Battle For Better Pay And Conditions At www.dailymail.co.uk/news/article-7739441/2-200-German-Amazon-workers-strike-Black-Friday.html?ito=social-facebook&fbclid=IwAR08w_uDXGn_SLX3Dlaa6G5zGOoi-XH6R-H5_5culnvCVZofQu__OdjqkHY