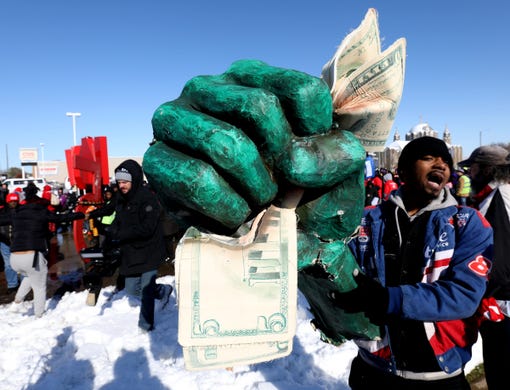 Union Membership in the U.S. has fallen dramatically over the last generation.

Despite that, data shows being in a Union is still very effective in protecting the rights of Workers and their earnings.

Data on Full-Time Wage and Salary Workers comes from the Bureau of Labor Statistics (BLS), whose numbers on weekly earnings show a clear and consistent fact: Members of Unions earn more than Non-Members.

Women who are Members of Unions earn $10 more per week than Men who aren’t Members of a Union.

The racial pay gap is so large that although Union Membership has a big impact, it still does not quite bridge the difference.

Black Union Members earn $63 less each week than their White counterparts who are Non-Union.

Hispanic Workers who are Non-Union have some of the lowest earnings in the country - just $657 per week, almost half of what White Union Members can expect.

To Read This Labor News Story In Its Entirety & To View A Number Of Charts, Go To: www.theguardian.com/news/datablog/2019/nov/24/how-much-does-union-membership-benefit-americas-workers?CMP=share_btn_fb&fbclid=IwAR3y0saTHYaiiMvDUVzJYyXBrTn8kKVy-tWOhS0EcXbKSBlg8NMN8VObw8o