Think Trump & Republicans Support Union Workers? Then Read This: Host Of Trump Officials Invited To Speak At ALEC Meeting, Held To Discuss Anti-Union Strategy & The Next Steps Of Its Major Anti-Union Project 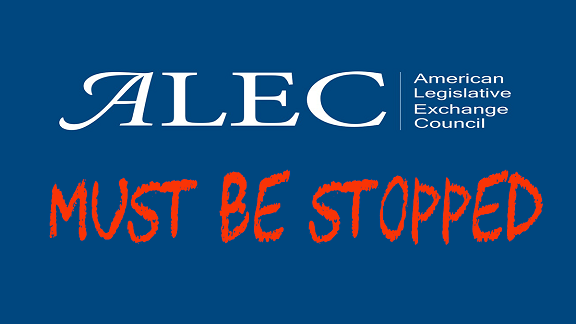 (SCOTTSDALE, ARIZONA) - The American Legislative Exchange Council (ALEC), a group that has spent decades working to undermine Organized Labor and Worker Protections, is scheduled to host a five-hour meeting on Tuesday (December 3rd) with invited legislators and state think tanks to discuss the next steps of its Anti-Union Project.

The event is set a day before ALEC will hold its States and Nation Policy Summit in Scottsdale, Arizona.  Details of the event, which do not appear on the ALEC Conference Agenda or elsewhere on-line, are revealed in records obtained by Documented via state public record requests.

According to the invitation, the attendees will discuss “Janus decision implementation, Union Release Time Reform, Union Recertification and provide an opportunity to connect with staff from local Think Tanks.”

Invited speakers at the ALEC conference, beginning the next day, include Secretary of Education Betsy DeVos, and Secretary of State Michael Pompeo, as recently revealed by Documented.

The event invitation was sent by Michael Slabinski, Director for the Commerce, Insurance and Economic Development Task Force at ALEC. The Private Sector Chair of this ALEC Task Force is Alibaba Group Director of State and Local Government Affairs, Bill Ashworth.

Alibaba is the giant Chinese e-commerce company renowned for its so-called “996” work schedule, where Workers are required to work from 9 a.m. to 9 p.m. for six days a week.

Documented in partnership with the Intercept first revealed the Alibaba involvement in ALEC.

The local Think Tanks referenced in the invitation are likely organizations from the State Policy Network (SPN), a corporate-backed network of state Think Tanks that ALEC works closely with.

SPN and groups in its network work in close partnership with ALEC and other organizations in the Koch-network to promote an Anti-Labor Agenda in the states.

Since 2018 when the U.S. Supreme Court ruled on the Janus decision, this work has included organizing a nationwide Opt-Out Campaign to encourage Public Sector Workers to leave their Unions.

The Janus case itself was part of the SPN Anti-Union Strategy.

The plaintiff in the Janus case was Illinois Public Employee Mark Janus, but the case was funded by the SPN Group the Illinois Policy Institute.

After the ruling, Janus left his state job for a new position at the Illinois Policy Institute.

After the decision, another SPN Group, the Michigan-based Mackinac Center launched a new project called My Pay My Say, targeting Public Sector Workers across the country.

It has already spent $490,000 on Facebook as part of this campaign.

Although they tell a very different story publicly (they talk about “Worker Choice” a lot), the Anti-Union work of ALEC and SPN is really about weakening the political power of Organized Labor.

Documented and the Intercept obtained the recording of a call SPN did in June 2018 with donors ahead of the Janus decision.  On the call, SPN CEO Tracie Sharp made clear that this was really about weakening the power of the groups that oppose their political agenda.

To Read This Labor News Story In Its Entirety, Go To: https://documented.net/2019/11/alec-to-host-december-meeting-with-state-legislators-and-think-tanks-to-discuss-anti-union-strategy/?fbclid=IwAR0ajvuxoV1VSoKkymc6qn6z00BGRDO6uxgoPqBzvtRW7Jn5d4m_F9vzTHo