Airlines Food Catering Workers Protest At Major Airports Across The Country: 60 Arrested At JFK In New York City & Another 39 At Philadelphia Airport 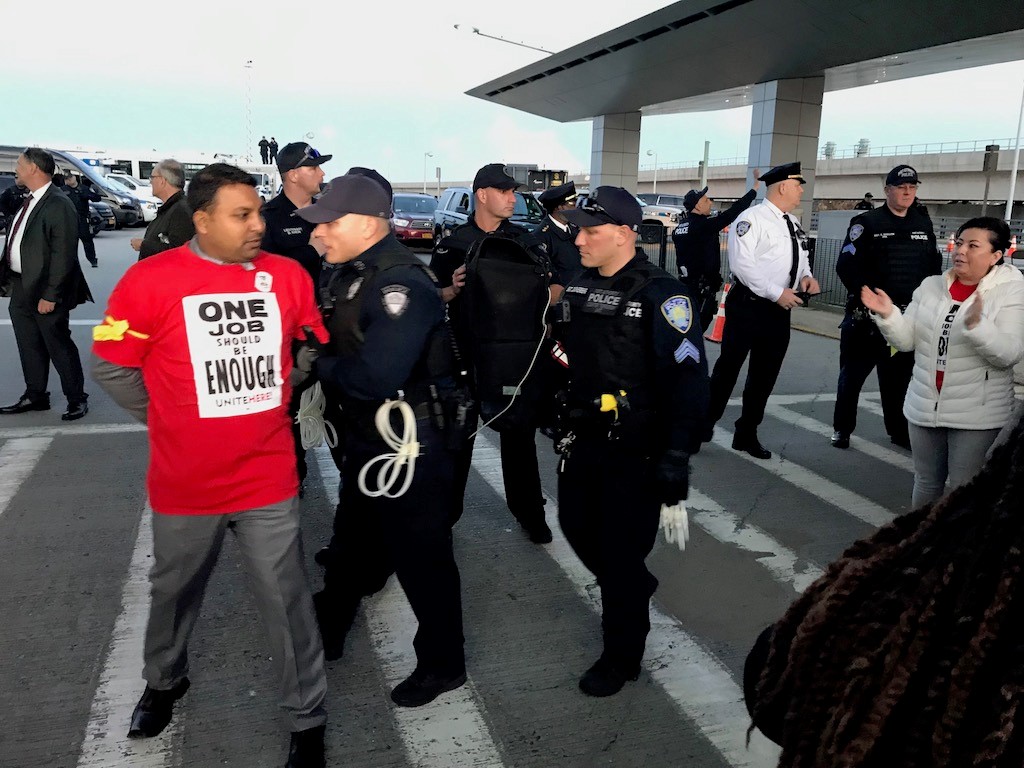 (NEW YORK CITY) - More than 1,000 UNITE HERE Members and supporters jammed a traffic island at John F. Kennedy International Airport on Tuesday (November 26th), loudly chanting that American Airlines’ food contractors should give their Workers a raise and decent health care.  The protest was one of 16 at major National Airports on behalf of 20,000 airline-Catering Workers, both those at subcontractors LSG Sky Chefs and Gate Gourmet and those directly employed by United Airlines.

“We’re here to ask American Airlines ‘just to hear us out so they can go back to LSG Sky Chefs and ask for better wages so we can live comfortably on just one job,’” LSG Driver Nadia Small-Lewis, 41, of Brooklyn told LaborPress.

About 60 people, including UNITE HERE Local 100 President Bill Granfield, were arrested when they blocked the roadway between the traffic island and Terminal 8, American’s base at JFK.  Port Authority police repeatedly blasted a recorded message warning against resisting arrest before escorting them to a nearby bus, generally not handcuffing them except for the last dozen or so.

Meanwhile, 39 people were cited by police for failure to disperse Tuesday evening at Philadelphia International Airport as part of the nationwide push during Thanksgiving week to win higher wages and more affordable health care for the Low-Wage Workers who prepare airline meals (For More On This Labor News Story, Go To: www.inquirer.com/business/philadelphia-airport-protest-unite-here-american-airlines-20191127.html?__vfz=medium%3Dsharebar&fbclid=IwAR33q3rjSNvMDOfUPWD7GDEFuwEpE3jm2SAwWC-NQaG4ZX1Oe1jFXG_Ac_o)

Back in New York City, a group of about 50 people staged a “die-in” inside the JFK Terminal, lying on the floor for about five minutes to dramatize that Workers have inadequate or no health benefits.

At a signal from a marshal, they got up and left before they were arrested.

The Workers are trying to recoup concessions made when airlines were facing bankruptcy after the 9/11 attacks, said UNITE HERE spokesperson Alyssia Osorio.

United’s Catering Workers have voted to Strike, she said, but because they work in interstate transportation, can’t walk out legally until the federal National Mediation Board (NMB) releases them.

The LSG Sky Chefs and Gate Gourmet contract talks are also in mediation.

UNITE HERE represents almost 1,500 Catering Workers at JFK, about 1,200 at LSG Sky Chefs and about 280 at Gate Gourmet.

The Union is demanding American insist that its subcontractors give their Workers better pay and benefits, Local 100 Secretary-Treasurer Juan Maldonado told the crowd.

“What the airlines are doing is through their subcontractors, ‘they’re trying to wash their hands and not care about us,’” declared UNITE HERE Recording Secretary Gwen Mills.

To Continue Reading This Labor News Story, Go To: http://laborpress.org/60-arrested-as-airline-food-workers-protest-at-jfk/