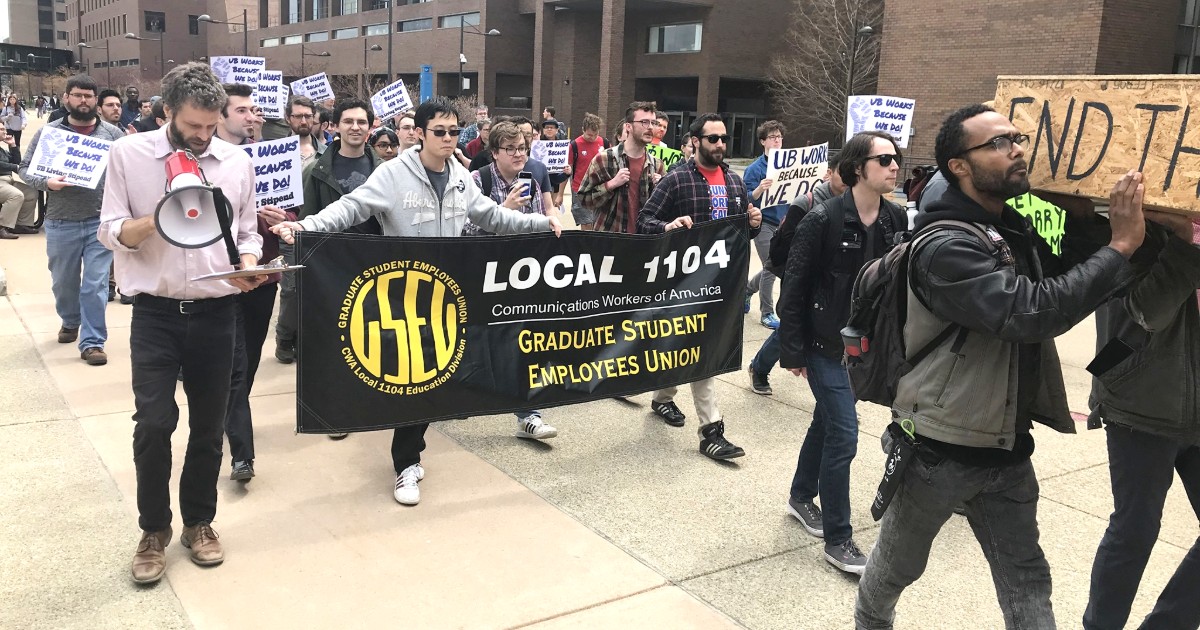 (BUFFALO, NEW YORK) - Communication Workers of America (CWA)-represented Employees at the University of Buffalo (UB) have won a massive wage increase - which comes two years after the launch of a Living Wage Campaign at UB by Members of the Graduate Student Employees Union (GSEU-CWA) Local 1104, which represents 5,000 Teaching and Graduate Assistants throughout the State University of New York (SUNY) System, including 1,300 Members at UB.

Graduate Employees are compensated in the form of an annual stipend, the amount of which varies considerably by campus and department.

Prior to the announced increase, the base stipend for Graduate Workers at UB was $10,000, a poverty wage and among the lowest of any major public research university in the U.S.

The Living Stipend Campaign began in the Fall of 2017 with the circulation of a petition to raise the annual base pay for Graduate Workers to $24,000 - a subsistence wage for a single adult in the Buffalo area, according to the Massachusetts Institute of Technology’s (MIT) Living Wage Calculator.

The petition, which quickly garnered more than 1,500 signatures, was delivered to UB Administrators by 150 GSEU Members and supporters during a march in September 2017.

In the face of management obstinance, the Living Stipend Campaign continued to press its demands through regular demonstrations, rallies, Op-Eds to local newspapers and engagement with other campus constituencies, including Faculty, Staff and Undergraduate Students.

In October 2018, more than 100 Graduate Workers and supporters packed a meeting of the UB Council, a University Oversight Body with members appointed by Governor Andrew Cuomo.  At the time, demonstrators demanded the Council use its authority to address the problem of poverty-level stipends for Teaching and Graduate Assistants.

In May 2019, the UB Faculty Senate unanimously passed a resolution endorsing the demand for a Living Stipend and calling for the formation of a committee - with equal representation from among Faculty, Grad Employees and Administrators - to develop a plan for implementing a Living Stipend by the start of the 2020-2021 Academic Year.

The recent announcement of a new $20,000 wage floor is a response to this sustained pressure by the Living Stipend Campaign and its allies.

It is a massive victory for GSEU-CWA 1104 that will lift the most precarious Graduate Employees out of poverty and improve the lives of hundreds of Members.

However, there is still work to be done, GSEU-CWA Representatives said.

The announced increase does not amount to a true Living Wage and does not appear to apply to Master’s Students working as Graduate Employees.

It is also not yet clear where the money will come from to pay for the raise or the effect it might have on the number of available future Teaching and Graduate Assistant Positions.

GSEU-CWA 1104 pledges to continue to fight until all of its members to earn a Living Wage.

To Directly Access This Labor News Report, Go To: https://district1.cwa-union.org/news/cwa-members-university-of-buffalo-win-massive-wage-increase?fbclid=IwAR2fM65iF4qGduJ6YvPZ5K1edrxrxkDXkL0od1ARVEQHjuyyWZ0XTQwDyyQ#.XdwhDHxmgSA.facebook