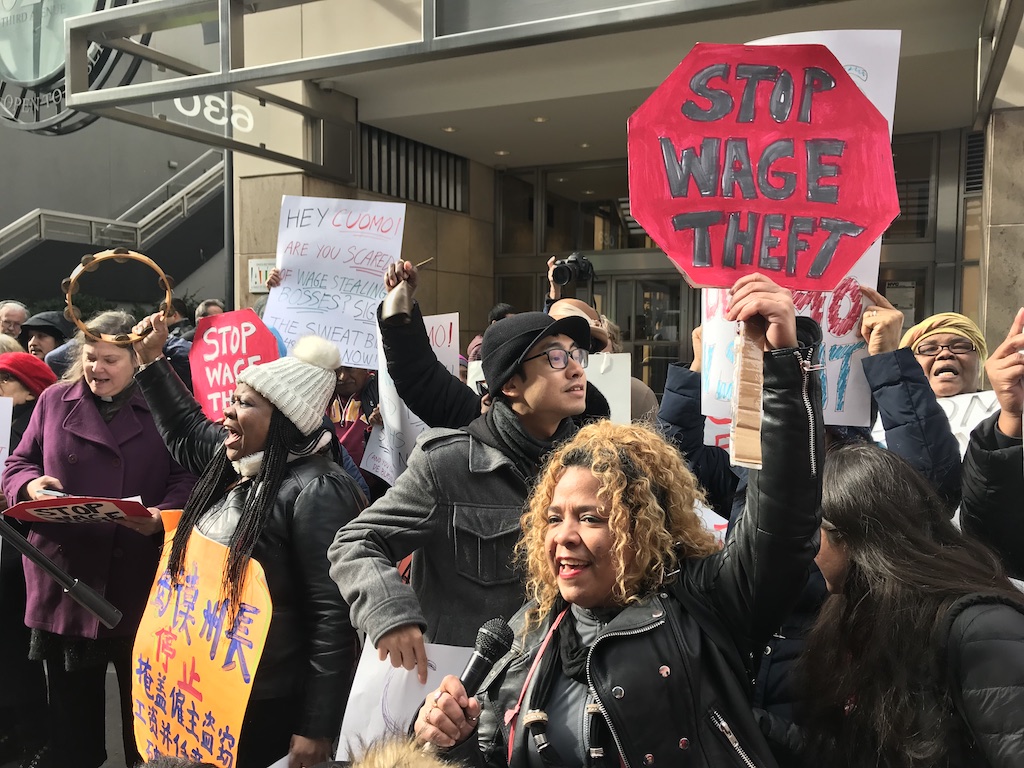 (NEW YORK CITY) - Chanting “No Mas Robo De Salarios,” more than 200 people rallied outside Governor Andrew Cuomo’s Manhattan office earlier this week to protest his failure to sign a Bill that would allow Workers suing to recover stolen wages to take out “Employee’s liens” on their employer’s property.

The Securing Wages Earned Against Theft (SWEAT) Act passed both houses of the Legislature in June.   It passed the Senate by a margin wide enough to override a veto, but not the Assembly.

“Right now, the Labor Law is not enforceable,” JoAnn Lum of the Chinese Staff and Workers’ Association told LaborPress.

By the time a wage-theft settlement is reached, she explained, employers accused of wage theft can hide their assets to avoid paying.

“Lawyers are having workshops on how to do this,” Lum said.

Jinming Vincent Cao, a former Waiter at the Wu Liang Ye restaurant in Midtown and Joy Luck in Chinatown, told the rally that he had been paid $300 a month for working 70 hours a week - but when 26 Workers won $1.8 million in back wages, they got nothing.

“This sweatshop boss transferred all the assets,” Cao said in English and Chinese.

The restaurant reopened under a new name.

“They don’t even run away,” he added. “We see them walking around Chinatown.”

At the Indus Valley restaurant on the Upper West Side, Delivery Workers were paid less than the Minimum Wage for Tipped Workers, and “the boss was stealing our tips,” former Deliveryman Solomon Perez told LaborPress, speaking in Spanish through an interpreter.

But the owner changed the name of the restaurant to Manhattan Valley and the Workers only collected $110,000.

The only reason they got even that, Perez says, was because the “supposed new owner” owed money to the old owner, so the judge had him pay it to the Workers instead.

“The most important thing is that we want Governor Cuomo to sign into law the SWEAT Act,” he said.

Cuomo spokesman Jason Conwall responded: “There were more than (900) Bills that passed both houses at the end of session and nearly (400) Bills remain under review by Counsel’s Office and the Division of the Budget.  It is our responsibility to ensure that the Bills, as written, are responsible, enforceable and accomplish their intended purpose.”

A 2017 study by the Economic Policy Institute (EPI) estimated that in New York State, employers cheat 300,000 Workers a year out of $965 million by paying them less than the Minimum Wage.

The Federal Department of Labor’s Wage and Hour Division recovered “a record” total in the 2019 fiscal year of $322 million in pay owed to Workers.

To Continue Reading This Labor News Story, Go To: http://laborpress.org/protesters-rap-cuomo-for-inaction-on-wage-theft-bill/