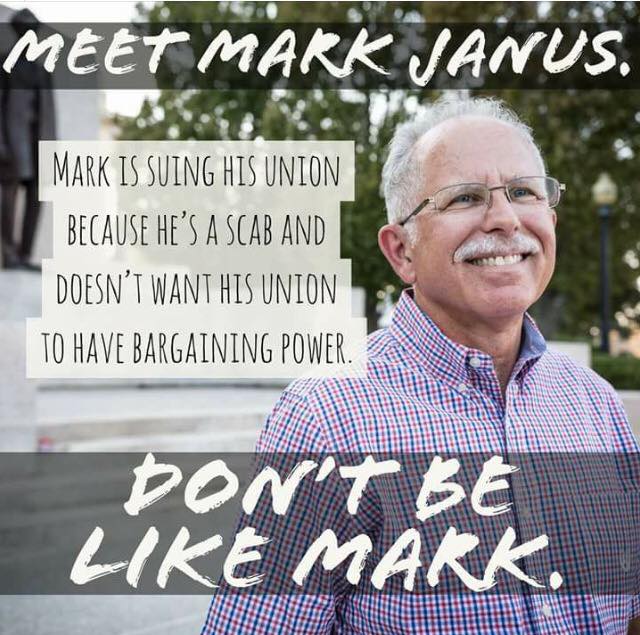 (LOS ANGELES, CALIFORNIA) - Mark Janus got the superhero treatment during a Summer gathering of the Conservative faithful at a meeting space in downtown Los Angeles's Wells Fargo Building.  At a conference dubbed The Janus Victory: One Year Later, one-time California governor Pete Wilson introduced the former Illinois Child-Support Specialist as a Superman of the Right whose action could bring the Red back to Blue California.

It could also bring back the kind of economic winter not seen by American Workers since before the New Deal, but the 66-year-old Janus looked more like a gray-haired Clark Kent as he stuck close to a set of talking points, crediting his Dad and the Boy Scouts for teaching him to finish what he'd started.

Janus was the plaintiff in a landmark Anti-Union Lawsuit brought by the National Right to Work Legal Defense Foundation and the Liberty Justice Center, in which the U.S. Supreme Court decided against Organized Labor.

Janus v. AFSCME was a major victory for the Political Right, which had claimed the American Federation of State, County and Municipal Employees’ (AFSCME) requirement that Janus pay Representation Fees (these are different from Union Dues, which Janus did not pay) to AFSCME infringed on his Free Speech Rights.

After the Court’s 5-4 decision, Public Servants who don’t want to belong to their Unions no longer have to pay such fees - even though the Unions negotiate wages and working conditions on their behalf.

Union treasuries seem somewhat diminished by the ruling, but Workers have not abandoned their Unions en masse, at least so far.

However, the future is less certain, as pro-Janus forces plan an onslaught of well-funded efforts to lure Public Employees away from their Unions.

On the one-year anniversary of his victory, Janus, now a Senior Fellow at the Liberty Justice Institute, told Capital & Main that he's working full-time to spread the word of his win.

“I've already made the fight, took it all the way to the Supreme Court, got the affirmative decision, so now why not continue the fight to let people know what their rights are and let them decide for themselves,” Janus told about 80 people who skewed far older and whiter than the state as a whole.

Among them was a smattering of local Orange County Elected Officials - along with former Orange County Public School Teacher Rebecca Friedrichs, who was promoting a 2018 book on her near-victory before the Supreme Court (The court deadlocked on her case, which was nearly identical to Janus, in 2016, after the death of Justice Antonin Scalia.)

The NRTW Legal Defense Fund's William Messenger, who argued Janus' case before the Supreme Court, declared a qualified victory: “We deprived Unions of hundreds of millions of dollars from people who didn't want to participate.  It's an incredible accomplishment.  But we had to learn and understand the legal and political landscape in non-right-to-work states,” Messenger told the group. “We're seeing resistance.”

Still, Unions have so far weathered the Janus storm.

To Continue Reading This Labor News Story, Go To: https://prospect.org/justice/mark-janus-wants-union-dues-back/