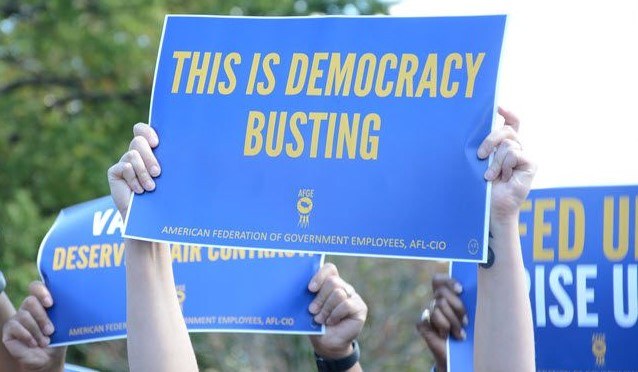 (WASHINGTON, D.C.) - The American Federation of Government Employees (AFGE), the Nation’s largest Union representing Federal Workers, says a draft proposal by the Trump Administration seeks to overturn 47 years of legal precedent and could, if it stands, make it harder for Federal Employees and Union Representatives to successfully challenge Workplace Discrimination Complaints.

Official Time is time provided under the law for Federal Employees to work with their Labor Representatives to address and resolve workplace disputes, grievances, and violations of Labor Law.

However, a draft proposal by the Equal Employment Opportunity Commission (EEOC) would seek to overturn this long-established precedent and exclude Union Representatives from receiving Official Time to work on EEO complaints.

“As the EEOC acknowledges in its draft regulations, the use of reasonable Official Time when responding to a bias complaint is a right that both Employees and their designated representatives have held since before the EEOC began handling Federal Sector cases,” AFGE National Vice President for Women and Fair Practices Jeremy Lannan said. “The EEOC’s sudden move to strip representatives of this long-held right simply because they serve in the Union is disgraceful and, if allowed to take effect, will have a chilling effect on the ability of Workers to successfully challenge workplace discrimination.”

The EEOC’s move to restrict the use of Official Time for Bias Complaints follows a larger assault by the Trump Administration on Employees’ Representational Rights.

Republican President Donald Trump issued three Executive Orders (Eos) in May 2018 that, among other things, instruct agencies to severely restrict the use of Official Time by Labor Representatives and deny any time for handling Employee grievances or representing Co-Workers in arbitration.

“The Trump Administration is doing everything it can to strip Federal Employees of their rights and protections and to eradicate Labor Unions from the federal workplace,” AFGE National Secretary-Treasurer Everett Kelley said. “The American People should be appalled by this administration’s willingness to ignore the will of Congress and violate the law to trample on Workers’ Rights.”

Making it harder for Federal Employees to raise issues of discrimination or other EEO violations is especially cruel in light of the increased attention on Worker mistreatment resulting from the #MeToo movement, said Rachel Shonfield, who serves as President of AFGE Council 216, which represents EEOC Employees nationwide.

“The EEOC has seen a noticeable uptick in the number of sexual harassment claims sparked by the #MeToo Movement, yet somehow this administration believes Federal Employees need less help - not more - in fighting these and other discrimination cases,” Shonfield said.

AFGE representing 700,000 Workers in the Federal Government and the Government of the District of Columbia.

To Directly Access This Labor News Story, Go To: www.afge.org/publication/draft-eeoc-proposal-would-have-chilling-effect-on-workers-challenging-bias-complaints-union-says/?fbclid=IwAR0qN6PLi4gVMgdLWEimhh_LFCH0XwvPng6jwYPhz6DDwG7bFK7Jn83rtec#.XdRVf1QBPOw.facebook