How About This One: Washington State Business Owner Calls The Union, Says We Want In! 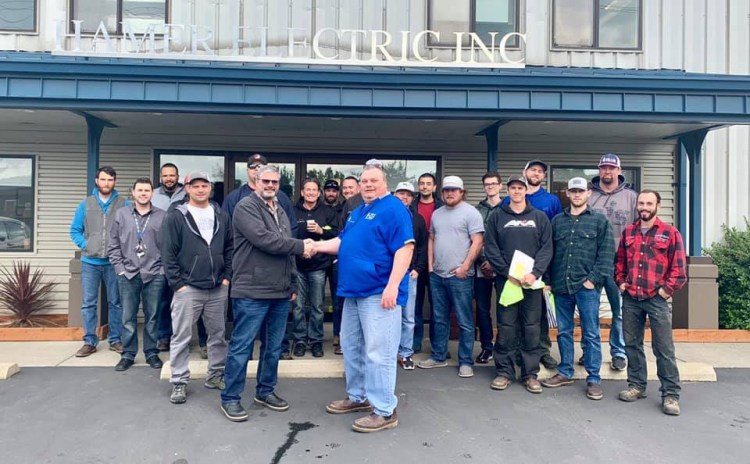 (LONGVIEW, WASHINGTON) - It’s not every day an employer calls a Union to talk about signing up - but that’s what happened at Hamer Electric in Longview and now, both the company’s owners and the Union Officers of International Brotherhood of Electrical Workers (IBEW) Local 48 are celebrating a combination they believe will make both sides stronger.

Brothers Kyle and Cory Cole have been co-owners since 2017, when they bought the business their grandfather founded in 1971 from their father and uncles.

Access to the Union Hiring Hall means Hamer can scale up and take on larger projects.

“We ‘also wanted to offer our guys the best there was in benefits,’” Cole said. “And ‘we felt like the Union’s Training Center was state of the art.’”

“They’re in a ‘strategic location that will really help increase Union Market Share’ in industrial work in the Longview-Kalama area,” IBEW Local 48 Business Manager Garth Bachman said. “We’re ‘excited to have them on board and help them grow.’”

Mike Bridges, IBEW Local 48’s Representative in Longview, said Hamer already had a reputation as a good employer, with compensation close to the Union Scale.

Twenty Hamer Employees – more than three-fourths of the existing workforce - made the transition and are now Local 48 Members.

The owners signed on October 18th, Employees signed up on October 25th and terms and conditions took effect on November 1st.

To Directly Access This Labor News Story, Go To: https://nwlaborpress.org/2019/11/business-owners-call-the-union-we-want-in/?fbclid=IwAR0tKzTMAw9ox7qTulsr8Ch2Ix_mAFkONAW9S567JViccXeZfNKYyrf-Tis