As Thanksgiving Travel Ramps Up, UNITE HERE Plans Protests At JFK & Several Other Airports Across The County In The Latest Effort To Secure Improvements In Pay, Health Care & Working Conditions For Airport Caterers 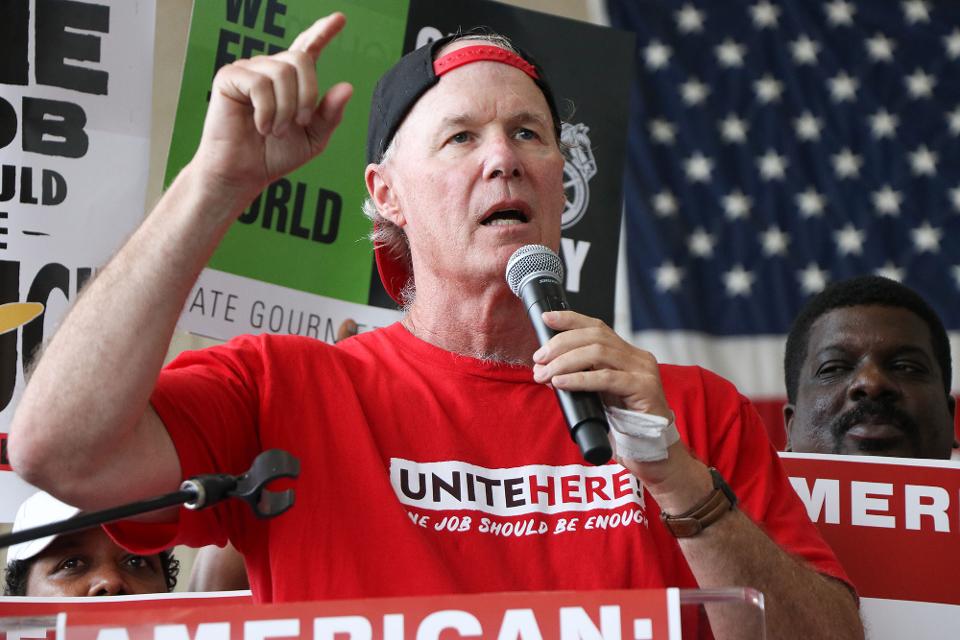 (NEW YORK CITY) - Airline Trade Group Airlines For America says Thanksgiving holiday air travel will be the heaviest ever this year, with about three million passengers on each of the five heaviest days between Tuesday, November 26th and Sunday, December 1st.  But on Tuesday, a lot of the projected 2.8 million passengers are going to see Airport Labor Demonstrations.

UNITE HERE, which represents Airline Catering Workers, plans demonstrations at 17 airports including JFK in New York, Charlotte, Chicago O’Hare, Dallas, Newark and Washington National, to name but a few.  In fact, the Union expects the number of demonstrators at each airport to range from about 200 to as many as 1,000 at JFK.

UNITE HERE President D. Taylor (pictured above) said the Union has no intent to disrupt holiday travel, but it wants to call attention to the Workers’ plight.

Except for about 2,700 Caterers at United Air Lines, who last week voted nearly unanimously in support of a Strike if on-going negotiations fail, most U.S. Catering Workers are employed by two companies, LSG Sky Chefs and Gate Gourmet.

UNITE HERE is engaged in mediated talks with the two companies.

“We ‘don’t want to affect’ customers,” Taylor said in an interview. “We ‘do want to get a message out.’  ‘Our goal is to bring to light what’s going on with the plight of Workers.’  We’re ‘trying to say that airline companies make billions and we want a piece of the American Dream.’”

Taylor said the demonstrations will focus on American Airlines, even though American does not directly employ Catering Workers, but rather subcontracts with the two providers.

“You ‘can’t take on every’ airline,” Taylor said. “You ‘have to deal with the largest.’  If American ‘agrees - that helps overall.’”

American has encouraged the catering companies to make a deal.

“American Airlines respects and supports the rights of Workers to join a Union and bargain collectively - in fact, (84%) of our Team Members are represented by Unions,” said American spokesman Josh Freed.

To Continue Reading This Labor News Report, Go To: www.forbes.com/sites/tedreed/2019/11/19/airline-caterers-union-plans-airport-protests-on-nov-26--a-day-when-28-million-people-will-be-flying/?fbclid=IwAR3C-Bng1_S_vD8eeXadLKVDrH9krHcQd57slzkfjKh-jZcRzsK1cxMocpc#5df6d1e35afe