Bill Comes Due For New Line Structures As New York City Construction Workers Demand Payment Of $70,000 In Unpaid Wages - New York Citys A Union Town. If We Dont Get It Shut It Down! Demonstrators Shout 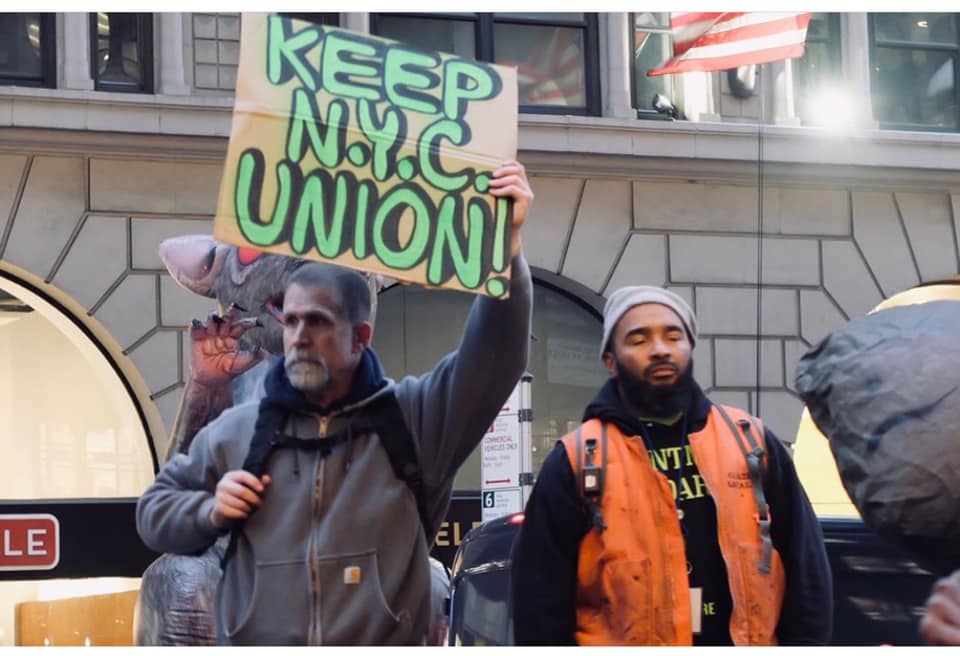 (NEW YORK CITY) - Hundreds of Union and Non-Union Construction Workers and their supporters gathered on Tuesday (November 19th) outside the 7th Avenue headquarters of New Line Structures - one of the largest construction management companies in New York City, to protest $70,000 in unpaid wages to more than 20 Workers.

New Line Structures is accused of hiring subcontractors who never paid Workers the wages they are owed for the work they performed.

With the backdrop of the giant inflatable rats, chants of “Take It Back, Take It Back For Safe Middle Class Jobs!” rose from the crowd of angry demonstrators.

The lack of site safety and the high rate of Construction Worker deaths was called “murder.”

Jerry Matthews, a District Council of Carpenters Representative, led other cries of “Union Busting, That’s Disgusting!” and held up a giant mock-up of the $70,000 invoice owed to Workers.

New York City Council Member Francisco Moya addressed the crowd, saying: “Sixty-three days ago, we stood right here in front of New Line Structures’ headquarters ‘to demand they stop using’ contractors ‘guilty of’ wage theft and safety violations.  ‘I guess they didn’t hear us.’  ‘This is about human dignity!’  Seventy Construction Workers ‘died in two years and no one has done a goddamn thing about it!’  ‘Someone has to stand up to it.’  This city ‘was built on the blood and sweat of Workers’  ‘We will hand them this invoice - they can easily pay that bill.’  ‘Pay that invoice or we’re coming after you!’”

Council Member Ben Kallos also made an appearance, saying: “It’s ‘time to stop exploiting’ immigrants.  We’re here to stand with the twenty brothers and sisters who worked six days a week for over forty hours a week with no overtime (with no pay).”

The crowd met Kallos’ words, raising their voices to demand, “Pay Them Back Now!”

Kallos held up a letter addressed to New Line Structures that demanded the unpaid wages, that he said would be delivered to the company.

Council Member Carlos Menchaca said: “When Unions and Workers ‘unite, we win.’  New Line is a company ‘that shows its ugly face when it doesn’t pay its Workers.’”

The Brooklyn Council Member also told demonstrators about the special hazards that face Immigrant Workers: “More Immigrant (Workers) ‘die on construction sites.’  ‘We have to stay strong.’  ‘When one worker’s salary is stolen we all feel it.’”

Juan Carlos, a previously Non-Union Worker now in LiUNA Local 1010, spoke in Spanish and used a translator to communicate his dire experience on his Non-Union job where he was forced to work in contaminated soil: “After speaking to a Union Representative, ‘I was fired!’”

To Read This Labor News Story In Its Entirety, Go To: http://laborpress.org/bill-comes-due-for-new-line-structures-as-construction-workers-demand-payment-of-70k-in-unpaid-wages/