Just Over The Border: More Than 3,000 Canadian National Railway Rail Workers Out On Strike 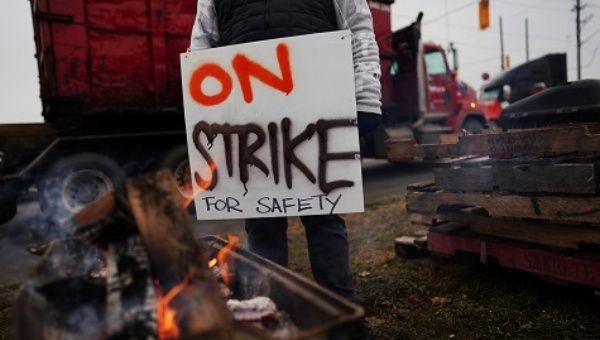 (CANADA) - About 3,000 Workers of Canadian National Railway, the country’s largest railroad operator, are out on Strike, Labor Union Teamsters Canada said after both parties failed to resolve contract issues.

"Conductors, Trainperson and Yard Workers at Canadian National Railway are now officially on Strike," the union said in a tweet.

Canada, one of the world’s biggest exporters of farm products, relies on its two main railways to move canola and wheat over the vast distances from western farms to ports.

Crude oil shippers in Alberta have also increasingly used trains in the past year to reach U.S. refineries as an alternative to congested pipelines.

The Union had issued a 72-hour Strike Action Notice period to the company over the weekend after the talks reached a stalemate, setting the momentum for the first Strike at Canadian National in a decade.

Teamsters Canada spokesman Christopher Monette said the Strike comes because Workers are “hitting a wall on issues related to health and safety”.

The Labor Union’s Facebook account also shared pictures of dozens of CN Workers carrying placards in support of the Strike on the streets of Saskatoon, Saskatchewan.

CN Workers voted in favor of a Strike in September after negotiations failed to produce a contract.  The previous Collective Bargaining Agreement expired on July 23rd.

Union spokesman Christopher Monette said they are still in talks with CN in hopes of reaching a negotiated settlement and ending the Labor dispute as soon as possible.

The Union has said passenger rail services in the country’s three biggest cities would not be affected by the Strike.

For More On This Labor News Story, Go To: https://globalnews.ca/news/6187126/cn-rail-union-strike-trains-november/?fbclid=IwAR35TMGXavSNvQxLM2uOaJi7jMdjM9ufwuaxX_sue0QykMxhHGQjCbkhMdo and www.reuters.com/article/us-canad-natio-rail-labor/thousands-of-canadian-national-railway-workers-go-on-strike-idUSKBN1XT0XX