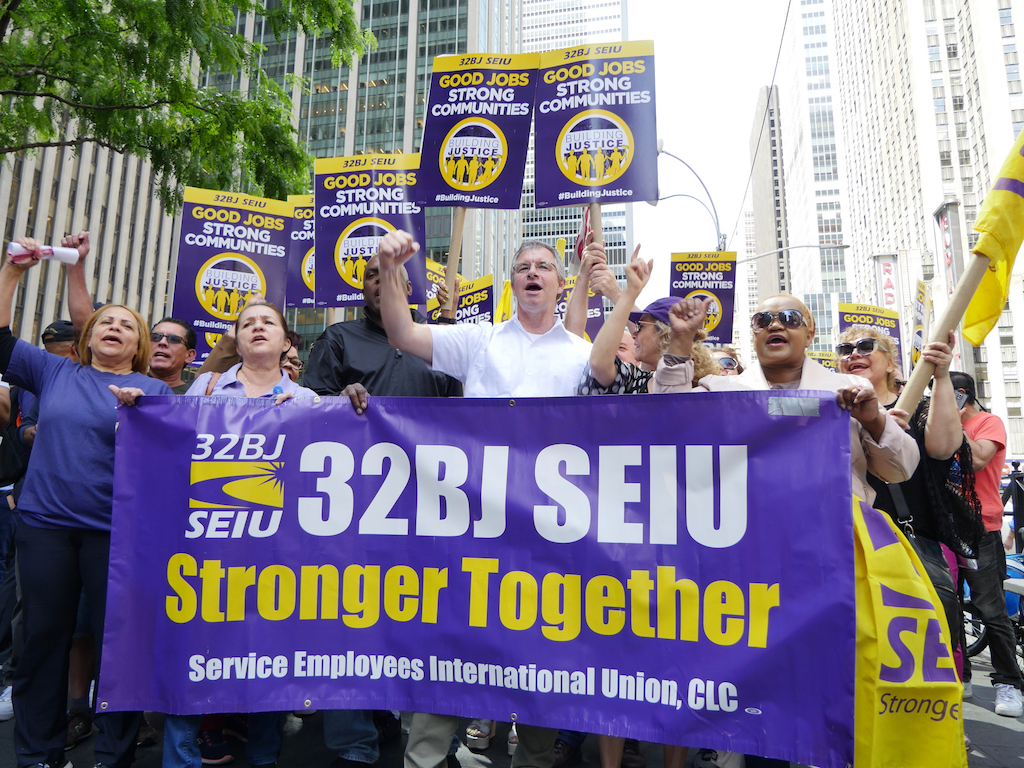 (NEW YORK CITY) - Kyle Bragg, the head of 32BJ Service Employees International Union (SEIU) - which represents 22,000 Commercial Cleaners across New York City, has only been involved in two strikes over the course of his decades-long Union career - and he doesn’t expect to be involved in one now.  But, that doesn’t mean his Members aren’t prepared to walk if their contract with the Realty Advisory Board (RAB) expires on December 31st.  That’s because the Union’s Membership have actually been “Strike ready” since the Summer.

Bargaining between 32BJ and RAB officially commenced on November 14th and left Bragg mindful of two competing factors that will ultimately guide the course of negotiations.

On the one hand, Bragg concedes that the lucrative building boom that RAB Members are enjoying, coupled with work 32BJ SEIU has traditionally done to forge a mutually beneficial partnership with the organization of building owners - are factors that “all contribute to our ability to get a contract done without a fight.”

That said, Bragg has entered into this latest round of RAB bargaining - his first leading the Union charge following the shocking death of the late 32BJ President Héctor J. Figueroa on July 11th - with his “eyes wide open” and understanding that not everyone in the industry sees the world the way Trade Unionists and their allies see it.

“There are those ‘who don’t believe’ our Members ‘should have employer-paid’ health care, that our Membership ‘should be responsible for their own’ retirement care,” says Bragg.

According to Bragg, the Union has an established track record of working with the building industry to help contain ever-rising health care costs - everything from pressuring Albany to pass beneficial legislation to doing “some things with co-pays that shows this is more of a partnership than some lopsided deal.”

Full-time Commercial Janitors with 32BJ already carry $100 co-pays for hospital stays and ER care - and $40 co-pays to see a specialist - assuming all those medicos are in-network.

“My Union Health Insurance ‘is crucial for me,’” says Kristinia Bellamy, a Building Cleaner and Member of the 32BJ Bargaining Committee. “I am a breast cancer survivor and I have to take a pill that costs ($500) ‘per’ prescription.  ‘If I wasn’t covered, I don’t know how I would afford that, even with a good salary.’  ‘A lot of us worry about what could happen to us without our Union Health Insurance.’”

A month prior to his passing, 32BJ President Figueroa led a massive demonstration outside Bryant Park and declared,: “The building industry ‘is booming’ in New York City and we ‘have to start telling the building owners and the contractors that we have done the work.’  ‘We have earned what we deserve and we are coming for our fair share of the wealth that is here in New York.’”

Ena Softly, another Member of the 32BJ Bargaining Committee and an Office Cleaner at 3 Times Square, issued a statement last week saying: “We take care of these buildings and it makes us very proud.  Millions of New Yorkers who work in these office buildings go home to happy families and we need the same in exchange for taking care of them.  We should be able to live in the same city where we work.”

In October, 32BJ Office Cleaners in Philadelphia secured a new four-year contract that not only increases pension contributions - but extends those same benefits to new Workers.

To Continue Reading This Labor News Report, Go To: http://laborpress.org/moment-of-truth-draws-near-contract-covering-22k-nyc-office-cleaners-to-expire-soon/