A Pro-Worker Editorial From Of All Places, The Houston Chronicle: Domestic Workers Keep Us Going. They Deserve Workplace Rights

A Domestic Workers Rights Movement Is Picking Up Steam Across The Country. Nine States - Including California, Hawaii & New York - Have Passed Domestic Worker Bill Of Rights, As Has The City Of Seattle.

Published Monday, November 18, 2019
by The Editorial Board Of The Houston Chronicle 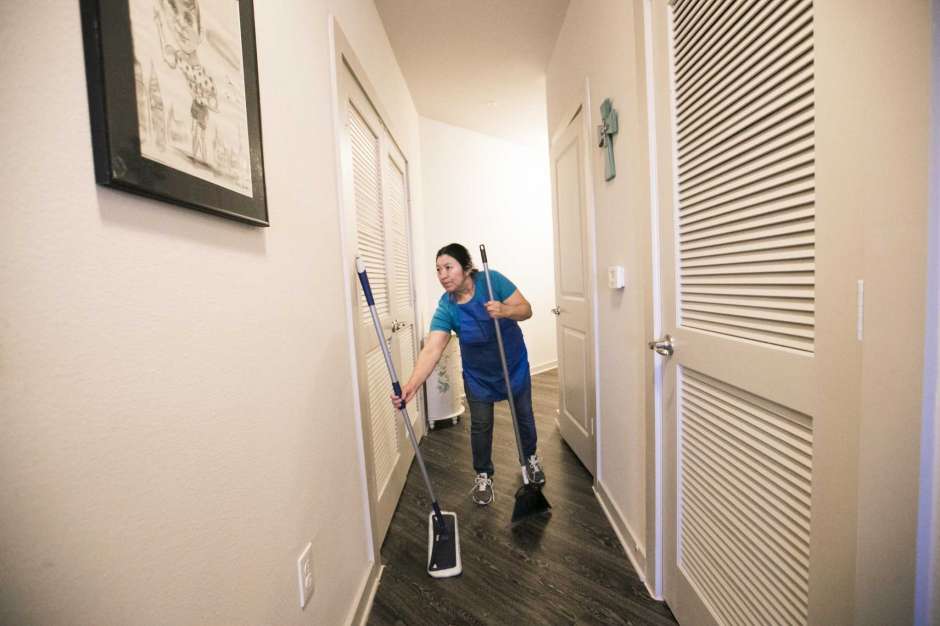 As the Getty Fire bellowed over an affluent part of Los Angeles last month, belching black smoke and turning the skies a hellish red, dozens of Housekeepers and Nannies trudged up hills, headed to work in multi-million-dollar homes.  Their employers had fled, seeking safety far from the danger zone, but many Domestic Workers still reported to their jobs for fear of being fired or losing a day’s wages.  Others were unaware of a mandatory evacuation order.

In many cases, noted Los Angeles Times Reporter Brittny Mejia, the bosses had simply forgotten to warn their Employees of the encroaching fire - and the Workers took the silence to mean that they were expected to clock in.

The situation - while extreme - illustrates a fact of life for many Domestic Workers: The Housekeepers, Nannies and Caregivers who provide vital services for families and whose labor helps fuel the Nation’s economic engine are often forgotten.

Many are underpaid and overworked, putting in long hours without overtime pay or benefits.

They face sexual harassment, discrimination and wage theft, are subject to unjust firing and contend with conditions that pose health and safety risks.

And, they work in jobs that aren’t covered by State and Federal Protections that most other professions take for granted.

The National Labor Relations Act (NLRA), for example, prohibits Domestic Workers - defined as someone performing a service in a private home - from forming Unions and collective bargaining.

Live-in Domestic Workers are excluded from overtime protection in the Fair Labor Standards Act (FLSA) and the Occupational Safety and Health Act (OSHA) doesn’t cover “individuals who, in their own residences, privately employ persons for the purpose of performing … what are commonly regarded as ordinary domestic household tasks, such as house cleaning, cooking, and caring for children.”

Today, Domestic Workers - who number more than two million nationwide - are mostly low-income Women of Color, primarily Immigrant and often undocumented, according to a report from the National Domestic Worker Alliance.

The Bureau of Labor Statistics (BLS) counted about 19,000 Maids and Housekeepers in the Houston Metro Area in May 2017, but that number only includes Workers employed by an agency.

It is a population especially vulnerable to exploitation and often afraid to report the abuses to authorities and government agencies.

That’s why gatherings such as a Domestic Worker Conference organized by Houston’s Fe y Justicia Worker Center are so important.

Moreover, it gives the Workers - who often work alone - a chance to meet peers and form support networks.

In one case involving a Houston live-in Housekeeper and Nanny, the Worker routinely worked 100-hour weeks, toiling seven days a week, from early morning to late in the night.

Workers in that situation have no time to look for other employment, no contact with other Workers who might pass on resources and no place to live if they lose their jobs.

But there are signs of change.

A Domestic Workers Rights Movement is picking up steam across the country.

To Keep Reading This Houston Chronicle Editorial, Go To: www.houstonchronicle.com/opinion/editorials/article/Domestic-workers-keep-us-going-They-deserve-14833010.php?fbclid=IwAR03M7i70LZwVZRc0X2y-lm3QhsJAQjT1rOHpAScKpyei2U7rAEjTFH0cKU