Rebuild NY Now Pushes For State Funds That Are Desperately Needed To Fix New York States Infrastructure Crisis - Labor Leaders Speak Out In Syracuse: Crumbling Roads And Bridges Are Bad For The Economy And Dangerous For All New Yorkers. 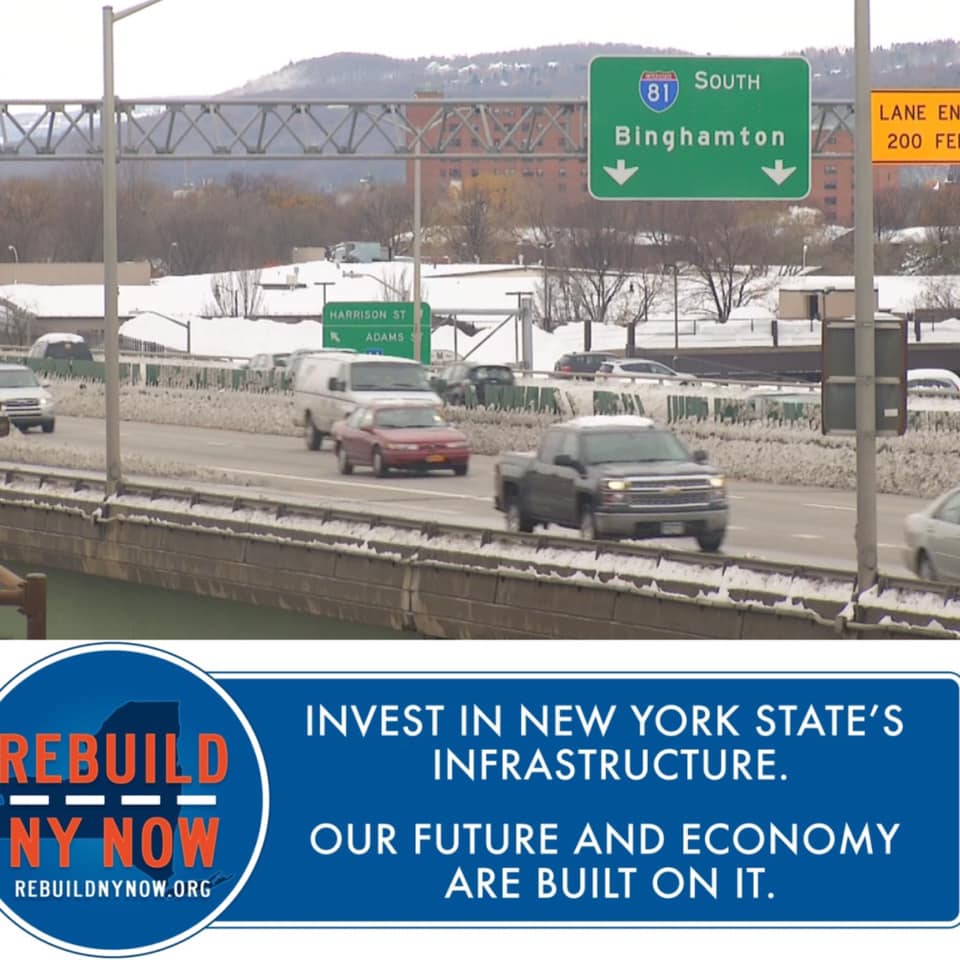 The Syracuse press conference was part of Rebuild NY Now’s statewide campaign to raise awareness about the State’s decaying roads and bridges.  In addition to a media tour, the campaign includes targeted statewide digital advertisement, two 30-second TV ads and a 60-second radio spot - all of which are currently airing across New York State.

Friday’s event in Syracuse took place in front of I-81 - which was recently featured in The Washington Post as an example of how aging and deficient infrastructure impacts urban communities and Communities of Color.

“With ‘one in eight’ bridges in Central New York ‘rated structurally deficient, this region shows the desperate need across the State for infrastructure investment,’” Rebuild New York Now President and CEO Mike Elmendorf said.  “Decaying roads and bridges ‘increase costs on families, destroy our economy and environment and poison children’ in Urban Communities.  ‘All this disproportionately impacts People of Color which itself is an injustice.’  ‘Yet, roads and bridges are among the best investments that government can make.’  ‘That’s why Rebuild NY Now is traveling the state to raise awareness about this crisis and the need for (New York) to put more resources toward fixing it.’”

Today, 10% of state and locally-maintained bridges in New York are rated in poor condition and in 2017, the New York State Department of Transportation (NYSDOT) projected that 2,116 bridges will become structurally deficient by 2022.

This would be an almost 100% increase since the Department’s last evaluation in 2009.

Rebuild NY Now is calling for the State to allocate $35 billion in the 2020 budget to stabilize the infrastructure crisis.

“As all the current studies have shown, our roads and bridges ‘are dangerously in need of repair and/or replacement,’” Ironworkers Local 33 Business Manager Scott Gardner said at Friday’s news conference. “Public funded work ‘will not only fill the immediate need of repair or replacement for our public roadways and bridges, but will also create employment opportunities for our current and future workforce.’  ‘With New York State-approved Apprenticeship Programs, the funding of this work will ensure that we have a well-trained workforce for years to come.’”

Several other Labor Leaders also spoke at the news conference:

Laborers’ Local 435 Business Manager Daniel Kuntz: “Rochester and ‘all’ of Upstate New York ‘has infrastructure needs.’  ‘Most’ of our roads and bridges ‘are in need of major repairs.’ The ‘disparity between’ Upstate and Downstate ‘is criminal.’  The citizens of Rochester ‘pay their taxes and expect to commute without fear of having falling concrete from a bridge or auto repair from deficient roads.’  New York State ‘needs an Infrastructure Bill that is dedicated to rebuild the roads and bridges without taking dollars out to balance a budget.’”

James Mason, who serves as Team Leader of the New England Regional Council of Carpenters:  “Central New York has an ‘economic boom on the horizon.’  Our elected officials ‘have worked hard to market our area to large businesses that will increase employment opportunities,’ such as the large warehouse project Trammell Crow wants to build, not far from here, in Clay.  This project will create one-thousand ‘new’ job opportunities.  Also, JMA Wireless wants to build, ‘a first of its kind,’ five-G Manufacturing and Edge Development Center right here in Syracuse, that will create another one-hundred jobs – ‘not to mention the hundreds of construction jobs these projects will create.’  A commerce company ‘cannot be successful with our current crumbling roads and bridges.’  ‘Crumbling’ roads and bridges ‘kill jobs!’  The State ‘needs to make investments into our infrastructure a priority in the 2020 Budget.’”

Daniel McGraw, who serves as Business Manager of International Union of Operating Engineers (IUOE) Local 158 and is the President of the New York State Conference of Operating Engineers: “Crumbling roads and bridges ‘are bad for the economy and dangerous for all’ New Yorkers.  ‘Investing in infrastructure is key to growing’ the economy, ‘not only to attract more businesses - but to create good public works jobs that help boost the local workforce.’  The ‘skilled men and women of the IUOE are proud to build New York’s roads and bridges and grow their local communities.’”

As part of Rebuild NY’s to educate the public and Federal and State Policy Makers, the organization promotes relevant research, data points and news reports that highlight the need to rebuild New York State’s deteriorating infrastructure.

For More On Rebuild NY, Go To: http://www.rebuildnynow.org/