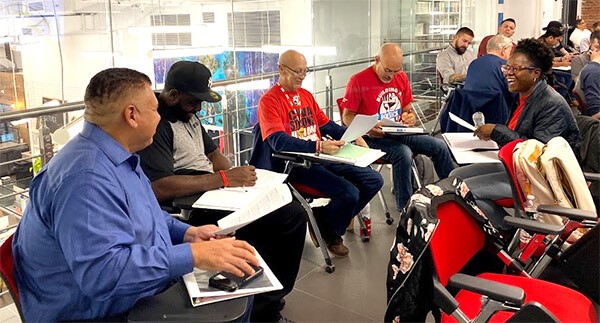 As part of the CWA Veterans for Social Change launch, CWA Military Veterans joined more than 40 Veterans from across the country for an Organizing Institute in October in New York City that was hosted by the Veterans Organizing Institute (VOI) and Common Defense, which is a Veteran-led grassroots organization committed to engaging, training and mobilizing Veterans to build power and promote progressive values.

The VOI provided training on the unique role of former Service Members in past and current people-powered Social Justice efforts, how to craft, deliver and present resonant messages to multiple audiences and the news media, grassroots organizing, and political analysis.

"Just as our Veterans are showing that they are ‘CWA STRONG’ by fighting for our Union values, CWA is making sure that our resources are supporting Veterans and their families," CWA President Chris Shelton said. "A new National CWA Veterans Committee, representing each District and Sector, will make sure that Veterans' issues are front and center in our political, legislative, human rights and organizing agenda.

To Directly Access This Labor News Report, Go To: https://cwa-union.org/news/cwa-launches-new-programs-for-veterans?fbclid=IwAR0APugMboQrJtn-Qd6IURBncIuVgYhn0LkohwZr_LwhprdmTr95trwBW4I