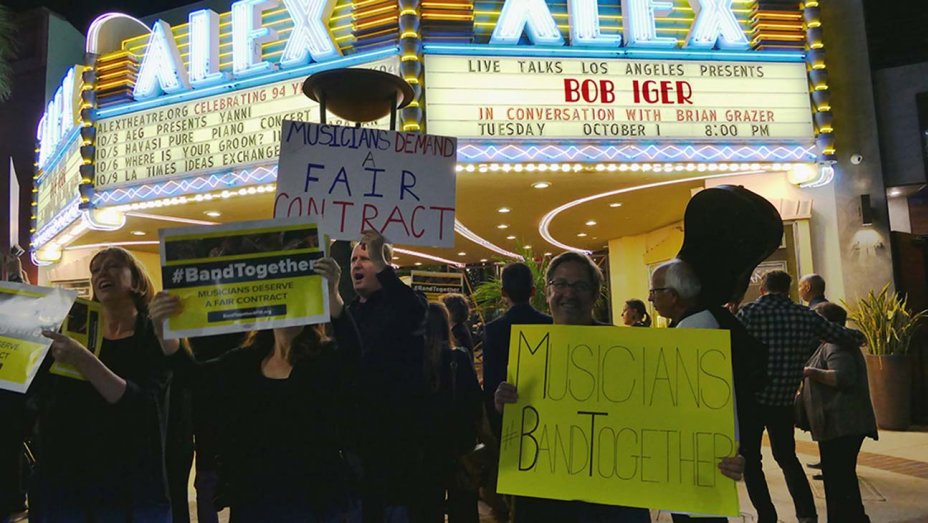 (LOS ANGELES, CALIFORNIA) - The life of a studio musician in Los Angeles is becoming increasingly precarious and the rapidly changing tech landscape may play a large role.

The denial of streaming residuals - layered on top of the offshoring of large amounts of scoring work to London and Eastern Europe - has been a growing source of anger for musicians as Hollywood conglomerates make bets on direct-to-consumer platforms, with Disney, Comcast and WarnerMedia all launching efforts within the year.

And while Singers (through their membership in SAG-AFTRA - Screen Actors Guild‐American Federation of Television and Radio Artists) receive residuals, Instrumentalists are left out.

“I can’t understand why residuals are okay for Vocalists, ‘but not for’ Violists,” Donald Foster, the interim Recording Musicians Association (RMA) President, told The Hollywood Reporter. “It’s ‘demeaning and it stings.’”

Talks between the American Federation of Musicians (AFM) Union and the Alliance of Motion Picture and Television Producers (AMPTP) are scheduled to resume amid enduring frustration among Musicians that studios deny them streaming residuals that above-the-line Unions achieved in 2014.

As television’s center of gravity begins to pivot decisively to made-for-streaming product, the lack of residuals for such programming becomes more and more urgent for Musicians.

“This is an ‘extinction-level’ event,” says Marc Sazer, long active in AFM Local 47 and the RMA, which is a related organization. “Our ‘ability to make a sustainable living is facing extinction.’”

Musicians' residuals amount to about $85 million per year, according to the latest available annual report of the Film Musicians Secondary Market Fund, which processes most AFM residuals.

And a typical Studio Musician makes 75% of his or her income from residuals, an AFM representative said.

As motion pictures and series are increasingly produced for streaming, a large portion of those overall figures may be at risk.

Even now, Musicians are but a drop in the bucket: Entertainment residuals amount to around $2.2 billion per year and adding in Actors' and Musicians' commercials residuals brings the total to about $3 billion.

Meanwhile, a recent negotiation session between the parties produced no movement.

"The studios’ Labor Relations attorneys maintained their position from our last negotiations," the Union stated in a #BandTogether update to Members. "They went through a long explanation of why there just isn’t any money available for musicians in the made-for-streaming business. Musicians’ … consensus was that the AMPTP’s economic explanation was misleading and omitted the billions they will collect in subscription fees.  It was ridiculous."

To Continue Reading This Labor News Report, Go To: www.hollywoodreporter.com/news/is-an-extinction-level-event-musicians-fear-livelihood-streaming-residuals-1246824