Via Workday Minnesota: I Know I Found My Career, Celebrating National Apprenticeship Week 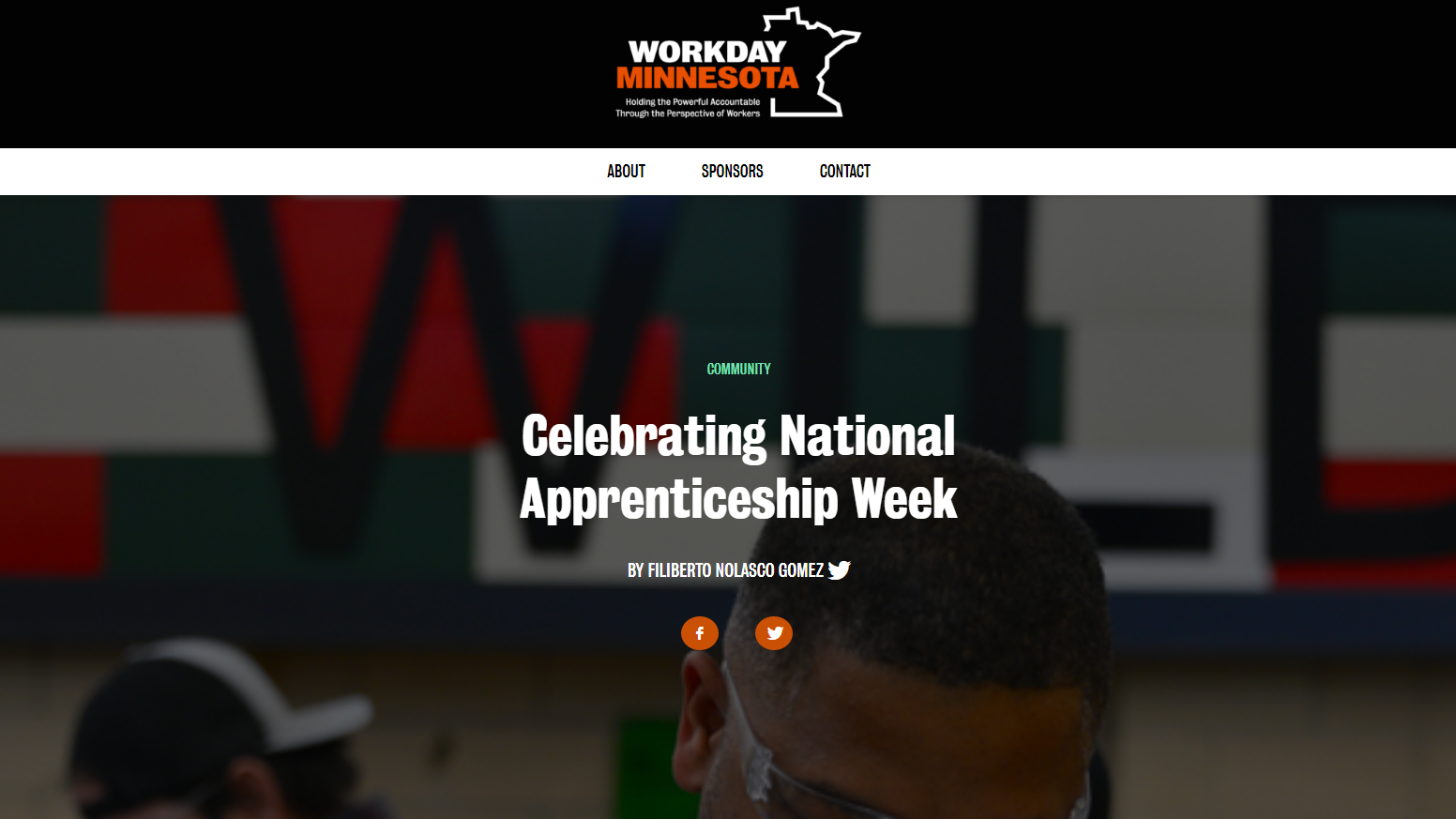 Now in its fifth year, National Apprenticeship Week is a nationwide celebration that allows Unions, communities and Educators to showcase their Apprenticeship Programs and Apprentices while providing valuable information to career seekers.

To date, there are currently more than 10,000 Registered Apprentices in the State of Minnesota.

In a statement, the Minnesota State Building and Construction Trades Council said: Registered Apprenticeship Programs are training our state’s future Plumbers, Electricians, Ironworkers, Crane Operators, Laborers, Carpenters and other highly skilled Trades Workers.  Registered Apprenticeships have been the pathway for more Women and Minorities to enter the Construction Trades.

As part of the week’s events, four Apprentice profiles from across the State were collected by the Minnesota Trades Council: Chevy, of St. Paul, is a second-year Sheet Metal Apprentice and says earning while learning allowed him to be the first person in his family to buy a home: Emily, of Fridley, has two college degrees, couldn’t find work in her field, but found her career as an Ironworker Apprentice; Christian, of Duluth, is a third-year Pipe Trade Apprentice after realizing that college wasn’t his passion and Laci, of St. Charles, is a first-year Operating Engineer Apprentice who found a new career operating heavy machinery.

Chevy: As a second-year Union Registered Apprentice with the Sheet Metal Workers Local 10, Chevy spent the last few last weeks cutting custom pieces of metal for an elementary school construction project in Spring Lake, Minnesota.  Working full time, he comes into the Apprenticeship Training Center twice a week for classes, learning the Specialty Trade.  “For years I had dead end jobs with no opportunity for advancement,” he said. “But now, I get to go to work, I love what I do and I learn something new every day.”  In three years, Chevy will be a Journeyman.  In the future, he wants to own his own sheet metal shop and employ Apprentices. “I want to give back.  This opportunity has made me feel like a more accomplished person, that I have a purpose.  I want others to have that chance too.”  Chevy says there are many benefits to being in a Union - especially retirement and health care.  “I have four kids, and I can take them to the doctor and not worry about how much it will cost.  I have great health insurance for the first time.”  Another benefit is financial security.  Shortly after becoming an Apprentice, Chevy and his wife became the first people in their families to buy a home: “My thirteen-year-old has his own room now, he’s very happy about that!”  “I encourage everyone to take that step towards an Apprenticeship,” he said.  “I tell my friends and family about what the Union offers and how it changed my life.  My son wants to follow in my footsteps and I couldn’t be more proud.”

Emily: Emily has two college degrees, one in business and one in theater.  After college, she looked for jobs where she could apply the skills she learned in school, but after working in customer service and at a coffee house, she decided to do some soul searching to find her true career path.  Emily thought a lot about what she enjoyed about her high school and college classes.  “I realized that I missed building things,” she said remembering her theater tech classes where she got to build sets and learned how to weld.  Emily did some research on-line, looking into several different Building Trades careers and decided that the Ironworkers Registered Apprenticeship Program looked promising.  She visited the Union Hall, took an aptitude test and interviewed with the Union.  “In my interview, I told the Ironworkers that I know it’s a tough job, but I wouldn’t have applied if I didn’t think I could do it.”  As a second year Ironworker Apprentice, Emily’s favorite part of her job is structural work - securing beams by bolting them together.  “Working makes you better. In the beginning, I felt like I was doing everything wrong, but the Journeymen take the time to correct me when I make mistakes.  You learn from them, and they are happy to help you.”  Whether it is on a lift or out on a beam high in the air, Emily knows she’s found her career.

To Continue Reading This Labor News Report, Go To: www.workdayminnesota.org/celebrating-national-apprenticeship-week/?fbclid=IwAR2SB6FGYXtfFWZ5GEJNCciB-ppcR2A7u2wj7-2ZrmDjnjkzSKoA11mgriI