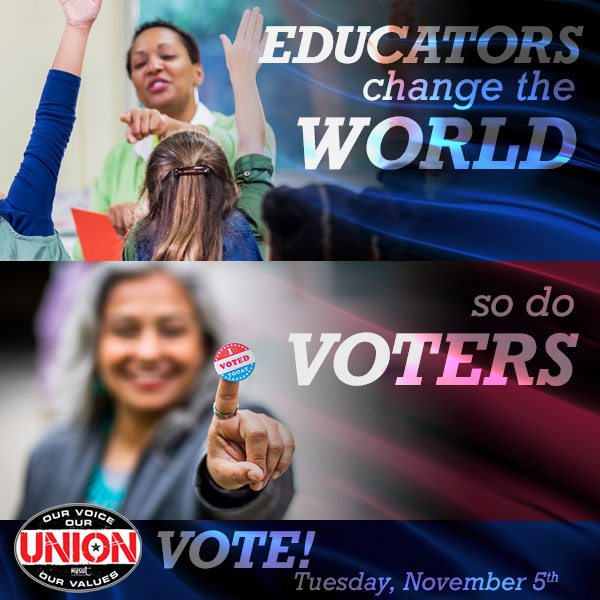 (ACROSS THE STATE OF NEW YORK) - In the early morning hours after the polls on Election night 2019, the New York State United Teachers’ (NYSUT) Leadership Team tweeted thanks to “all who did the right thing at the polls,” and gave a shout out to those who took advantage of the new, NYSUT-backed Early Voting Law.

“Extra special thanks goes to the many candidates who came through NYSUT’s Pipeline training to run for local office,” NYSUT President Andrew Pallotta said. “You truly make a difference!”

Dedicated Union Members and Staff worked vigorously for weeks to help elect Pro-Education Candidates who will work to advance the priorities of the Labor Movement across the state.

Here are some highlights from around New York State:

TARRYTOWN/MID-HUDSON: Seven NYSUT Members were elected to various levels of office in the Tarrytown and Mid-Hudson Regions.  Long-time and former local President Ralph Smith was successfully elected to the Putnam Valley Town Council by a five-point margin.  Pat Carroll, an AFT Member, received support from the Clarkstown Teachers Association and their work paid off, as Carroll secured a spot on the Clarkstown Town Board by a comfortable five-point margin.  Three additional victories were graduates of NYSUT’s successful pipeline program: Jenn Puja on her election to the White Plains Common Council; Ruth Walter for Westchester County Legislature; and Virginia Scott in her election to the Cornwall Town Council.

SYRACUSE/UTICA/VESTAL: United University Professions (UUP) Member Angela Riley was successful in her bid for Binghamton City Council.  Running with the support of the Binghamton Teachers Association, Angela garnered more than 74% of the vote in a decisive victory over her opponent.

LONG ISLAND: The Faculty Association of Suffolk Community College issued endorsements in 17 county legislative races - 16 of their endorsed candidates were successful, with one race still being too close to call.

ROCHESTER/ELMIRA: The Faculty Association of Monroe Community College was deeply invested in several races for County Legislature.  With a goal of transforming the Monroe County Legislature, they fell one seat short of victory, picking up only two of the three seats needed.  NYSUT Member John Baynes was one of the victors.  The entire Rochester Region mobilized in support of Adam Bello for County Executive and were victorious in electing him.  Bello is the first Democrat to hold the position in nearly 30 years.

To Directly Access This Labor News Story, Go To: www.nysut.org/news/2019/november/huge-effort-pays-off-for-union-members-in-elections-2019

Additional Election Results Are Available On The Board Of Elections Website At: https://nyenr.elections.ny.gov