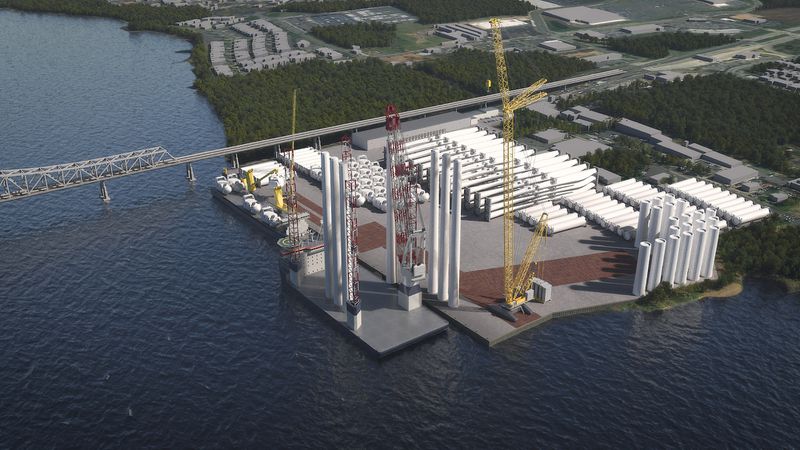 A landmark renewable energy opportunity has arrived for New York, giving us the chance to accelerate our clean energy vision, protect the environment and create a lasting impact for local economies across the state.

As New York begins the process of committing up to $200 million for potential port sites that will manufacture, assemble and transport the turbines for offshore wind farms, we must build a world-class offshore wind port that will anchor the industry’s supply chain throughout the region and support thousands of good-paying, long-term jobs.

The natural place to do it is on Staten Island.

Governor Andrew Cuomo has committed to the nation-leading development of 9,000 megawatts of offshore wind energy by 2035.

His award of the first 1,700 megawatts of this goal - the largest procurement of offshore wind power in the country - is a critical piece in what will be a multi-billion-dollar economic ecosystem.

To realize the full potential of this promising future, it’s crucial we invest in smart port infrastructure now.

Offshore wind projects require a port facility that can efficiently handle tall, heavy wind turbines and, most importantly, provide unrestricted access for the movement of those turbines between the port and the ocean - meaning there can be no bridge or other height restrictions on the way out to sea.

Such a port, in turn, will lead to supply-chain investments in other ports and manufacturing sites that will make New York the center for this fast-growing industry.

The terminal is centrally located to wind farm projects up and down the Mid-Atlantic Region.

And unlike any other port sites in New York, there are no bridges between the Arthur Kill Terminal and the wind-farm sites off the coast of New York.

This means turbines can be fully assembled and delivered to offshore wind farms in a most efficient and cost-effective manner.

Such efficiency means fewer vessel trips and shorter installation times, resulting in lower construction costs and emission reductions for offshore wind farms built over the next few decades and beyond.

With the Arthur Kill Terminal in place, New York would be positioned to become a regional hub in a vital sector.

This is no small thing.

The city and nearby suburbs would be able to attract manufacturers of wind turbine components and support other renewable energy technology businesses Upstate and Downstate.

In the end, hundreds of millions of dollars would be injected into New York’s economy.

Built under a Project Labor Agreement (PLA), the Arthur Kill Terminal would create hundreds of solid, local Middle Class jobs with benefits for Members of the Building Trades Unions.

That will set the stage for the hundreds of family-sustaining careers in the offshore wind supply chain.

In addition to these new jobs, the Workers employed at the Arthur Kill Terminal will receive extensive hands-on training, giving them a significant advantage in competing for jobs in offshore work in New York and beyond.

The Arthur Kill Terminal is a no-lose proposition for New York’s offshore wind industry - but it requires urgent action.

We are encouraged the New York State Energy and Research Development Agency has begun the process of investing in offshore wind ports.

It is critical the state move quickly in advancing the development of these facilities.

Otherwise, New York risks being left behind as other states compete to attract the supply chain of this $70 billion industry.

The Empire State is set for an energy revolution - the only question is whether we will take advantage of it economically.

We have the chance to firmly seize the immense economic opportunity offered by the burgeoning offshore wind industry through smart, forward-thinking investments.

As leaders in New York’s Labor Community, we urge New York State to move quickly and make the Arthur Kill Terminal a reality.

To Directly Access This Labor News Story, Go To: www.nydailynews.com/opinion/ny-oped-winds-of-change-on-staten-island-20191101-ngrxh5hhffhnbp7rkjb4zuhzmy-story.html?fbclid=IwAR3izNsshs-DBSE5JiXvGgvY3-rHhdM2vUqhd6ha_lOkKKsIojOKybceJ1U&link_id=2&can_id=d28a0e75022b91d73fc95bc86b686390&source=email-union-matters-november-8-2019&email_referrer=email_658391&email_subject=union-matters-november-8-2019