A Movement Every Construction Union Across The United States Can Get Behind: Nevada Laborers Union Works To Curb Opioid Abuse 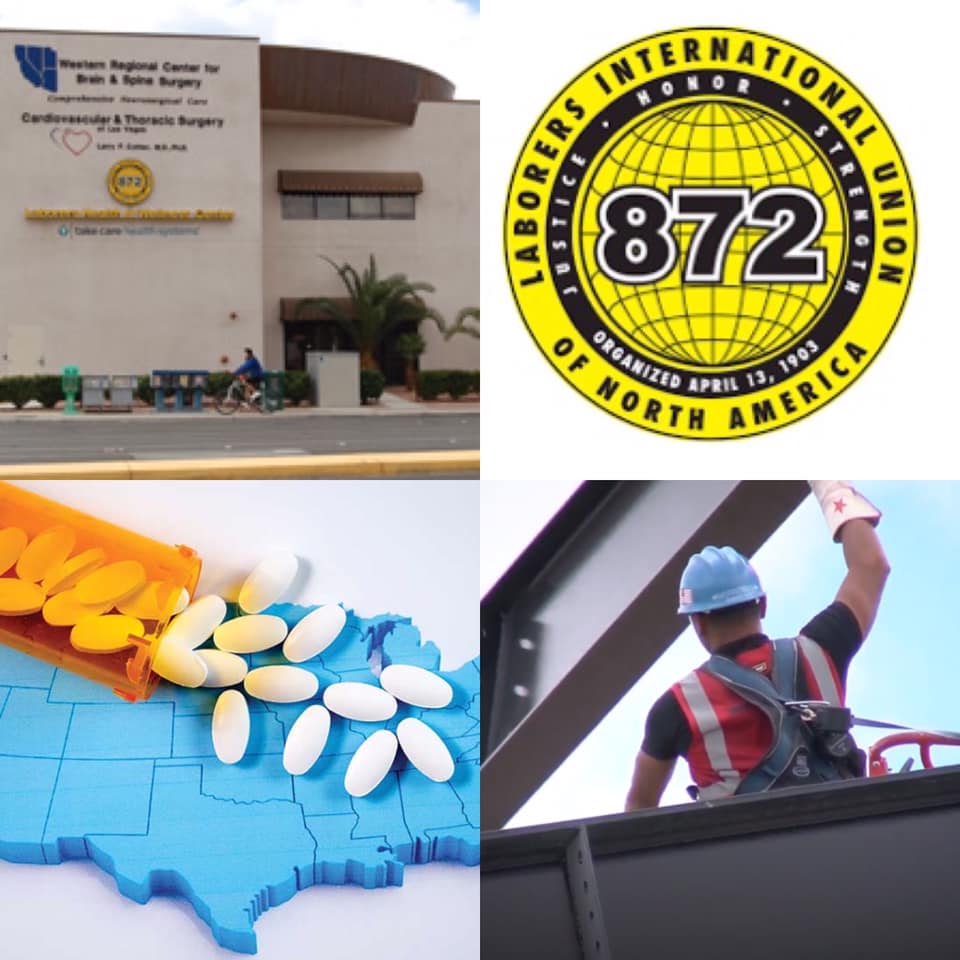 (LAS VEGAS, NEVADA) - According to a 2017 study, Construction Workers were among the most susceptible to opioid abuse due to occupational hazards.  In Southern Nevada, Laborers Local 872 saw those issues arising years ago and decided to take action.

Tommy White, who serves as Secretary-Treasurer of Local 872, said: “We started looking at it way back in 2005-2006 when we started seeing this whole big problem on job sites when Members started failing drug tests and were sent back to the Union Halls.  That's when we took a look at what we were going to need to do to stop it.”

The problem arose around the same time the Laborers Local decided to establish its own clinic for its Members and their families.

“We thought it was better for our Members to have their own place to go,” White said. “It's worked out great.  Our Trust Fund has saved a lot of money by having our own clinic and it also gives our Members access six days a week.”

The effort also allowed the Union to establish ways to monitor prescriptions.

“We don't prescribe narcotics here and if there is a narcotic that needs to be prescribed, it's very minimal usage.  Right now, if any of our Members are prescribed an opioid, they get a seven-day limit and after that, they have to get it pre-authorized.”

Dr. James Mortensen, a Physical Therapist at the clinic, says he sees a lot of Construction Workers coming in with back and knee problems, as well as pain due to repetitive motion injuries, but he says the emphasis is on physical rehab to avoid drug rehab.

Kathy Martin, a key Account Executive with Virtuous Group, is a Pharmacy Consultant who works with the Laborers Union clinic.  She says she’s seeing a similar change in the mindset of insurance companies, which are now more willing to cover types of pain management that are alternatives to opioids.

“One of the things that's interesting we've seen evolve over the last ten to fifteen years is the utilization of other therapies, (like) acupuncture,” said Martin. “A lot of health plans are now covering acupuncture.  They're covering physical therapy.  So, they're looking for alternatives, They're going back to the Advil, eight hundred milligrams, as a form of treatment and ice, heat – and taking time off.”

When opioids are required, the Laborers Union Clinic, and others like it, can monitor the prescription.  In fact, she says it was happening more than a decade before the Nevada Legislature passed a measure addressing the problem.

“Prior to that, most of the Health Plans and Trust Funds here had worked with their PBM (Pharmacy Benefit Manager) to limit utilization, so they did things like refills,” said Martin, “You could only get a refill of a narcotic at (95%), like a day before it was going to expire, so people couldn't stockpile."

“Groups like the Laborers put in a pre-authorization requirement, which is there now through the state, but was there many, many, years ago for anybody who wanted to utilize those drugs,” she explained.  “We don't prescribe narcotics here.  We looked at it the way it used to be years ago. If you were injured or sprained your ankle they gave you aspirin and told you to go home and sit on the couch.”

Now, according to White, “we do a little bit of physical therapy, and we do it here at our clinic. But really, what we want to do is get away from all the pain pills.”

To Read This Labor News Story In Its Entirety, Go To: https://news3lv.com/news/local/nevada-addicted-local-union-works-to-curb-opioid-abuse?fbclid=IwAR0SdIJjA2ptcH2npSfYg0tdZ-4xiopJ9MKlCCjN8ZfpWGgvYooWcUIFCDI