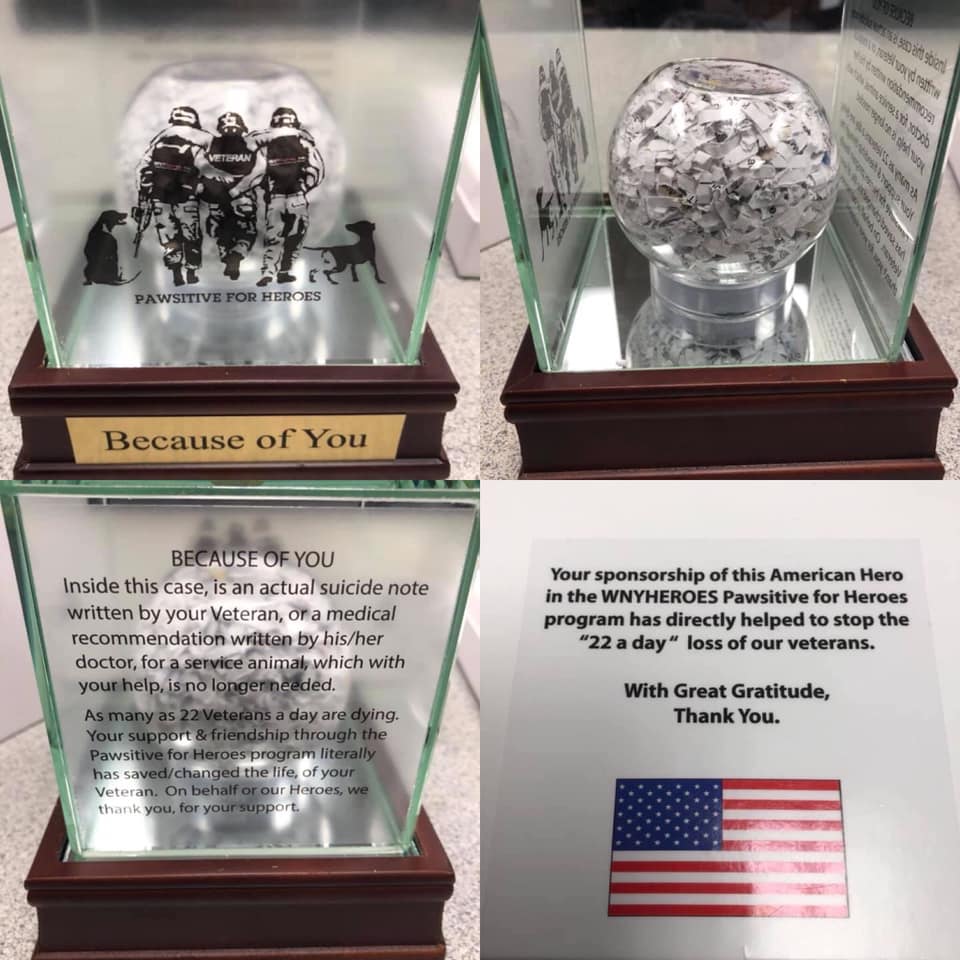 (TONAWANDA, NEW YORK) – Over the weekend, United Steelworkers (USW) Local 135L and its Membership were recognized for raising and donating $10,000 to the not-for-profit Western New York Heroes, Incorporated, which was used to purchase and train two service dogs for Veterans who were returning home from war.  But what made the eyes of those Union Reps tear up and their hearts full was the glass ball award the USW Local received that recognized their year-long effort: it contained an actual suicide note that was written, but never used by a returning Vet who received a service dog and was instead able to cope with post-war impact.

The event and those who were recognized couldn’t have been held at a more opportune time as everyone readied themselves to observe Veterans Day Weekend today - Monday, November 11th.

“The ‘power’ of that suicide note ‘helps sum it all up,’” USW Local 135L Trustee and Veterans Committee Member Frank Bystrzak told WNYLaborToday.com. 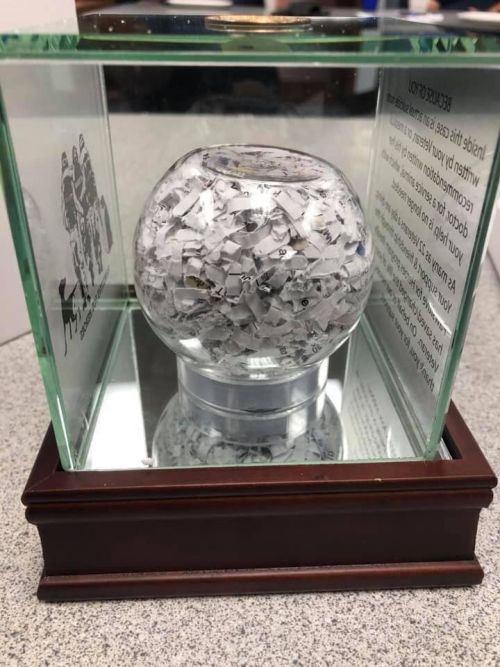 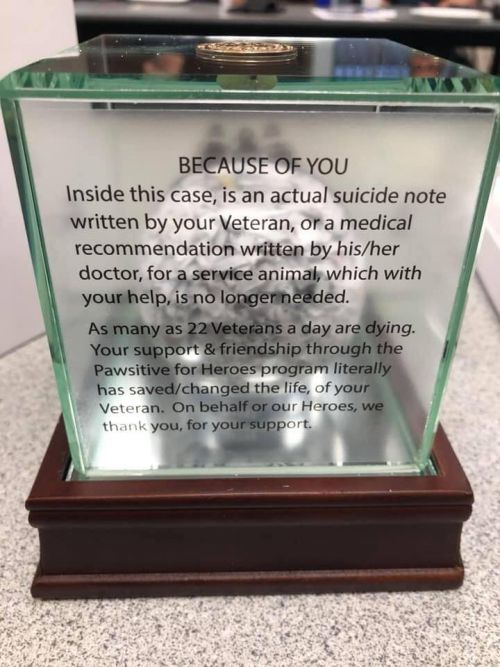 The note, which was shredded into pieces and contained within the glass globe (pictured above and below) carried the following inscription on one of its four glass walls: BECAUSE OF YOU – Inside this case, is an actual suicide note written by your Veteran, or a medical recommendation written by his/her doctor, for a service animal, which with your help, is no longer needed.  As many as 22 Veterans a day are dying.  Your support & friendship through the Pawsitive for Heroes Program literally has saved/changed the life of your Veteran.  On behalf of our Heroes, we thank you for your support.

“It (gave the Local and its Members, as well as 150 of Local 135L’s Members who are Veterans themselves) ‘an awesome feeling.’  ‘We did and it and we will continue to do whatever we can’ (in the future for the Western New York Heroes organization),” Bystrzak said. 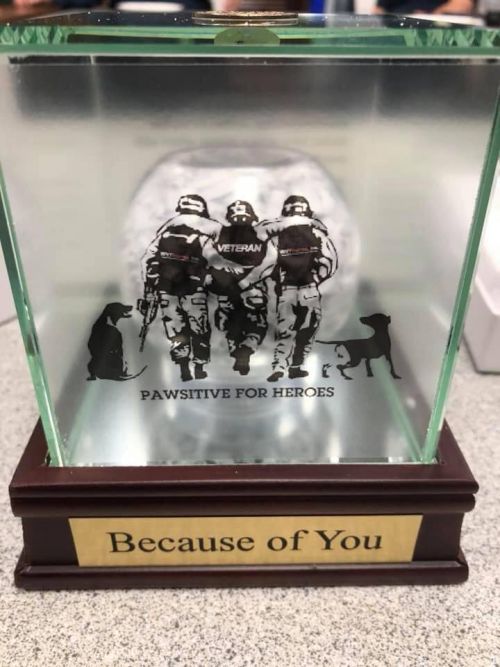 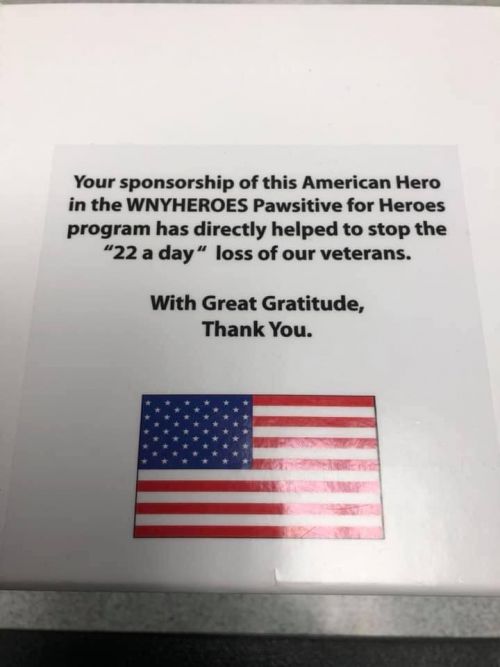 USW Local 135L - which represents 1,070 Members who are employed at the Sumitomo Rubber USA’s Tonawanda Tire Plant that’s located just outside Buffalo, was one of a number of area  organizations recognized at the Western New York Heroes’ 10th Annual Red, White & Blue Gala that was held over the weekend at the Seneca Niagara Resort & Casino in Niagara Falls.

Since its inception in 2007, the Western New York Heroes organization (https://wnyheroes.org/) has worked to make a difference for Western New York’s Veterans and Troops.  The non-profit has grown to become a critical life sustaining vehicle for Vets and their families by providing immediate financial assistance to those in need - which has been heightened with recent news of delays in getting services through the Veterans Administration (VA) that our Veterans face upon their return to the United States. 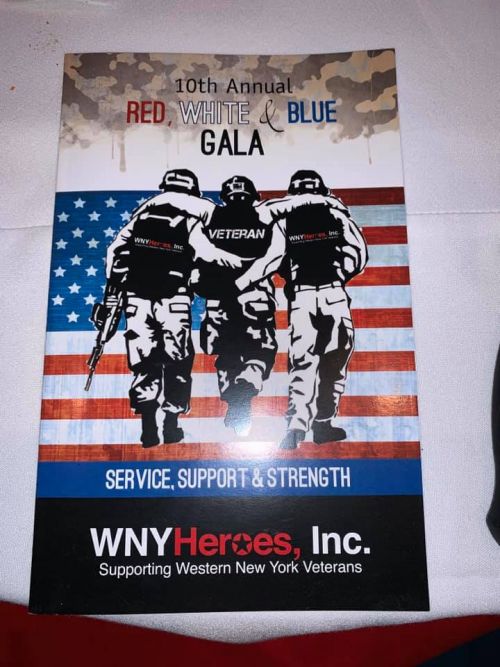 “This was the ‘first time’ our Local was involved helping Western New York Heroes ‘and they were pretty happy to get our help.’  We ran (several) hot dog fundraisers (pictured below) inside the plant, did some raffles and sold T-shirts (to raise the donations from Local 135L Members).  Am I proud? (of Local 135L’s Members) - ‘without a doubt,’” USW Local 135L President Thomas O’Shei, who in attendance at the gala, told WNYLaborToday.com. 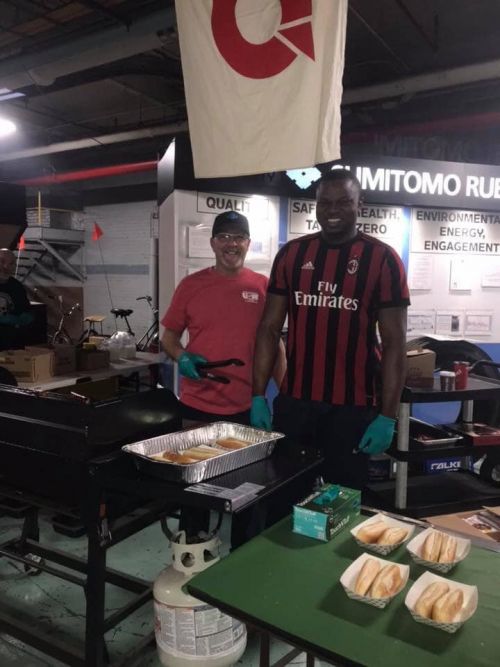 “These Vets are coming home and ‘they are in need,’” O’Shei continued.  “Some are coming home ‘to no homes or jobs and people just don’t understand what they’ve gone through.’  These service dogs ‘help them to readjust.’  Even here at the plant, our Members who are Veterans ‘prefer to talk (about their experiences) with our Members who are also Vets.’  ‘It’s that kind of support we were looking to add to.’” 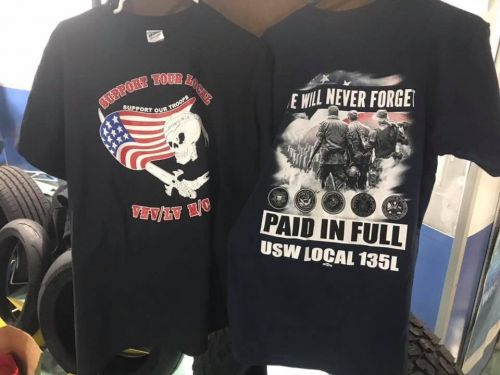 This was the first time USW Local 135L and its Members - who produce a variety of tires, ranging from passenger car and light truck tires, tires for SUVs and for buses and motorcycles, got involved with the Western New York Heroes organization, both O’Shei and Bystrzak told Your On-Line Labor Newspaper.

“I know they ‘appreciated what we did to secure needed help,’” Bystrzak said.  “Mike Urich, who heads our Veterans Committee (and who served as a Chief Petty Office (E-7) in the U.S. Navy), started this effort last November (2018) and ‘helped drive it forward.’  ‘And it really worked out.’  This money ‘came from our Members and they always come through anytime we ask them for help.’”