Did You Notice? Despite the Fact The Mainstream Media Isnt Reporting It, Theres A National Labor Uprising Happening Right Now Across The U.S. 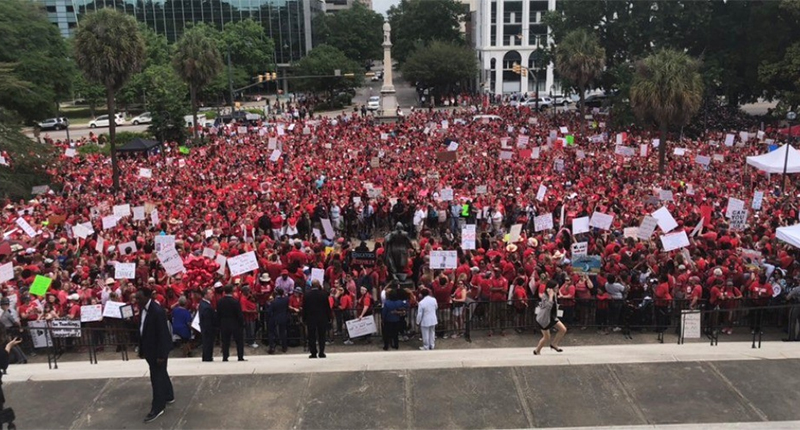 As the National Press Corps fixates on the coming and goings of Republican President Donald Trump as if it were the only story, the American Labor Movement is rising up, informed by almost a half-century of wage suppression made possible by unchecked corporate greed that’s turned our economy into a pyramid scheme where all the wealth drifts to the top.

For a generation after then Republican President Ronald Reagan fired the Nation’s Striking Air Traffic Controllers, Unions were intimidated from striking.

But those days are gone.

With our politics so consumed with the blood sport of partisan self-preservation, the actual conditions in the country continue to decline.

Hence, it is falling to Organized Labor to be last backstop against abject societal decline.

It has been decades since there been such tumult on the Labor front with Teachers going on Strike in Oklahoma, Arizona, Los Angles and Denver.

And last year, there were more strikes than there had been in 33 years.

And just recently, 8,000 members of the Transport Workers Union (TWU) Local 100 turned out in front of the Metropolitan Transportation Agency (MTA) Headquarters in lower Manhattan chanting “a people united, will never be divided.”

In 18 months, working around the clock in a dangerous underground environment, they restored a subway system that the politicians had neglected for a generation and let fall into a decrepit state of disrepair.

Yet, even as the system was showing signs of a rebound, with increased on-time performance, management wanted a long list of concessions.

Management was looking to the Workers to help close a budget gap that’s the result of the legacy of the agency’s poor management, which has resulted in so much debt that one out of every five dollars generated by the system goes to pay debt service to bond holders for past borrowing.

Whether it be a Red State like West Virginia, where Teachers in a Right-To-Work (for less) State successfully won a Strike, or in Chicago where Teachers went out for 11 days, Union Members are now willing to put something at risk not only to advance their own circumstance - but that of their communities that for too long have been neglected by the political system.

While the Corporate News Media likes to zero in on the fight over wages, consider that the Chicago Teachers were also going to bat for smaller class sizes, more Nurses, Social Workers and Librarians.

They know that in our winner take all society their students, over three-quarters of whom are from economically struggling families, need a lot more support than they have been getting.

So, what’s driving this militancy?

To Continue Reading This Labor News Report, Go To: www.rawstory.com/2019/11/theres-a-national-labor-uprising-happening-right-now-that-the-media-isnt-reporting/