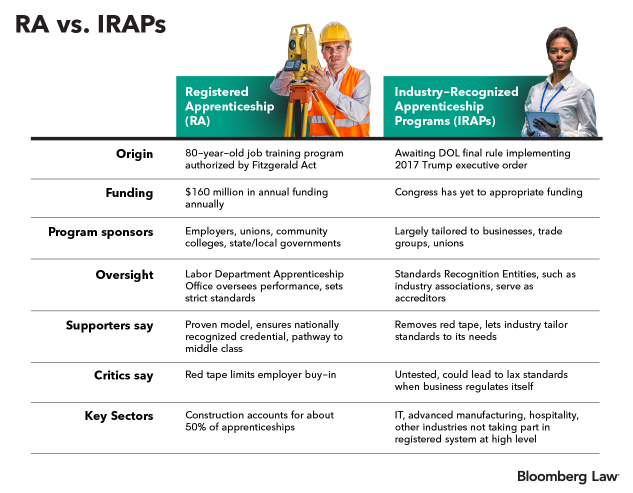 (WASHINGTON, D.C.) - The U.S. Labor Department (DOL) misused more than $1 million to finance a White House-directed Apprenticeship Program after repeatedly telling Congress that existing funding would not be spent on the initiative, the DOL has confirmed.

The Trump Administration intended for the Industry-Recognized Apprenticeship Program (IRAP) to be the centerpiece of Republican President Donald Trump’s Labor Policy, but the Labor Department has yet to finalize a rulemaking that would establish the new Apprenticeship System - and Congress hasn’t provided any funding for it.

DOL Officials have acknowledged, however, that their review of three outside contracts totaling $32 million found that $1.1 million in contracted work was drawn from funding Congress had allocated for a different job-training program and used to advance Trump’s proposal, which would give private sector companies greater freedom to set Apprenticeship standards.

House Democrat Staffers and a DOL spokesman confirmed the record of the conversation, which Bloomberg Law also verified by reviewing an internal agency discussion document detailing results of the financial review.

“During the call, the Department stated that earlier this year, it became aware of the potential misapplication of Training and Employment Services funds for the industry-recognized Apprenticeship Program (IRAP),” the DOL spokesman said in a statement.

Multiple offices “conducted a review of the work performed under three contracts to date” and found that $1.1 million in contracted work had in fact supported IRAP, the spokesman said in a follow-up statement.

The probe concerns whether the department violated the Anti-Deficiency Act, which prohibits Federal Agencies from spending in excess of what Congress has appropriated.

DOL said in its statement that the agency found a new source of funding for the $1.1 million.

The new source was identified after the Democrat-controlled House Labor Committee raised questions, but the Panel’s Chairman, U.S. Representative Bobby Scott (Democrat-Virginia), said he suspects the department is undervaluing its error.

Scott wants to learn more about the $32 million the department awarded to three firms to handle Apprenticeship-related contracts.

Contractor materials obtained by Bloomberg Law show that, contrary to a Congressional mandate that the funding support DOL’s long-standing Registered Apprenticeship Programs, at least one of those companies was keenly focused on IRAP.

To Continue Reading This Labor News Report, Go To: https://news.bloomberglaw.com/daily-labor-report/trump-apprenticeship-plan-under-fire-for-alleged-misuse-of-funds