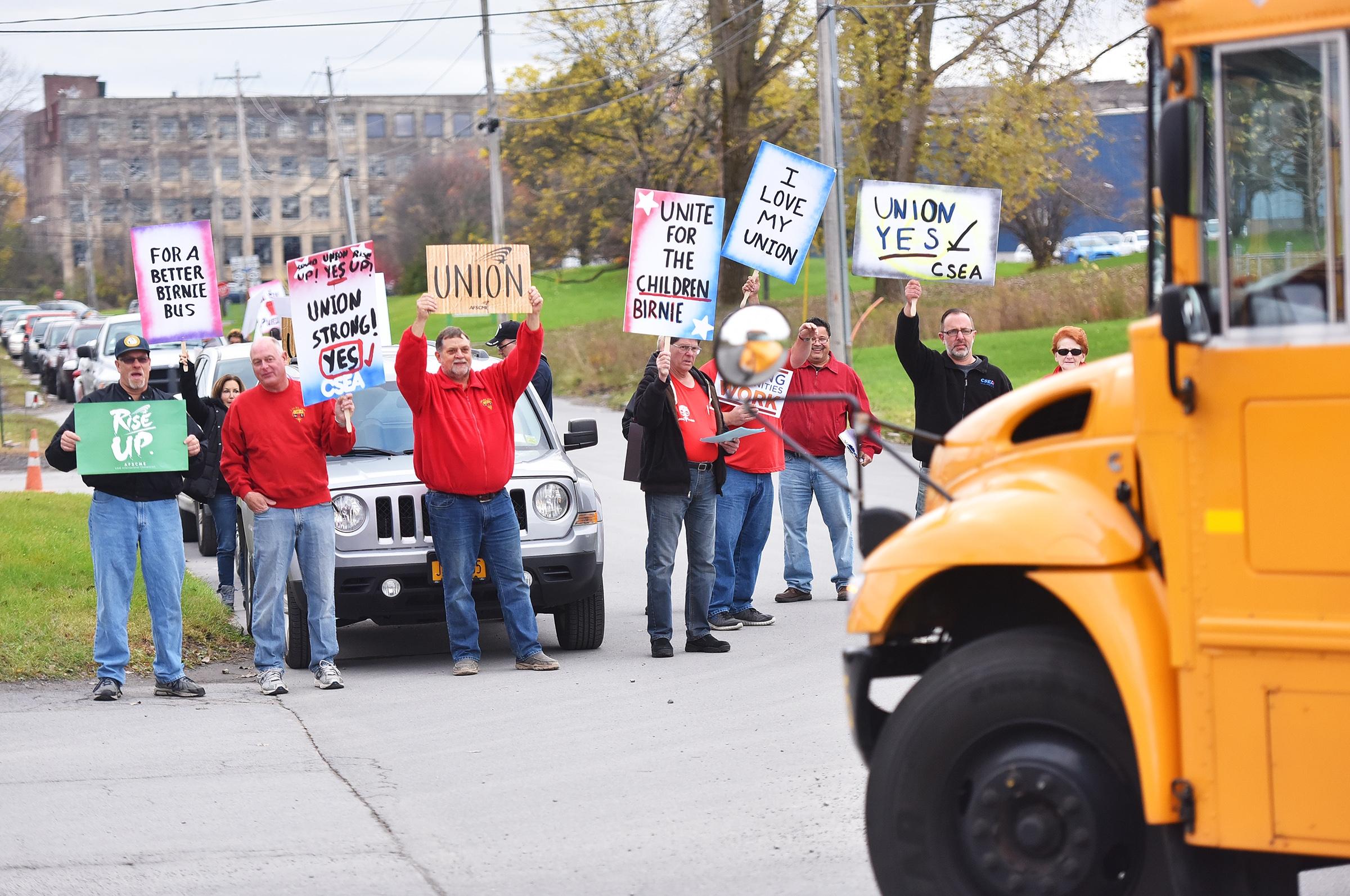 (UTICA, NEW YORK) - Dwyer Avenue in Utica was recently peppered with horn-honking and sign-waving as a group of Birnie Bus Staff at the company’s Utica site sought support for their wish to Unionize.  Workers said they have tried multiple times to get Birnie Bus management to address safety concerns, such as a lack of Bus Monitors, but their pleas have fallen on deaf ears, said April Land, a Union Organizer for Civil Service Employees Association (CSEA) Local 1000, which would represent the Birnie Bus Workers.

According to a CSEA statement, about 250 School Bus Drivers, Monitors, Dispatchers and other Employees at the company’s Utica terminal are seeking Union Representation.  Land said the staff reached out to the Union early this year to inquire about unionizing.

A Union Election has been scheduled for the Utica-based Birnie Bus Workers for Friday, November 8th in their quest to represented by the CSEA.

Leading up to the vote, the rallying Birnie Bus Staff report they have experienced less than favorable working conditions, claiming management has been engaging in Anti-Union activity.

“Instead of using the ($9 million) from the Utica City School bus contract to pay Workers correctly for the hours they work, Birnie Bus management has hired high-priced Union Busters and expensive Anti-Union attorneys to spread lies and cause confusion,” CSEA representatives said in a statement.

“They are telling everyone this is the ‘worst Union ever,’” said Baret, who has been driving buses for the company for about three years. “They ‘pay Union Busters a lot of money, so why not pay your own Employees?’”

Baret said she makes $15 per hour, but only gets about 10 hours per week: “I would like more hours, but right now, there’s a lot of favoritism (when it comes to getting more hours).”

Like other drivers at the rally, Baret said there are serious safety concerns.  She said she currently drives a bus with 75 children on a trip manifest with no Bus Monitor to assist with any issues.  The bus is rated to hold 63 passengers, she said.

Longo has driven buses for the company for about four months.

Regardless of pay, Longo said “it’s all about the children.”

“We have been trying to better the situation,” she said. “This is the third time we have tried getting the Union in.”

To Read This Labor News Story In Its Entirety, Go To: www.uticaod.com/news/20191029/some-birnie-bus-workers-in-utica-seek-to-unionize?fbclid=IwAR2aexxK_PVqhq4CS94RE_xvU2DZBrJsKoJkIzlezZoYMJUlYbz1ltmEpc0