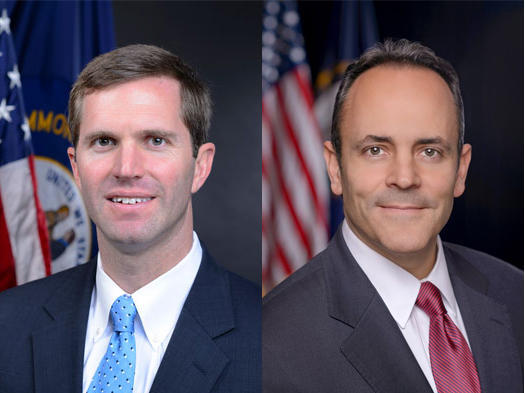 WNYLaborToday.com Editor’s Note: Democrat and Challenger Andy Beshear (pictured above on the left) defeated incumbent Republican Kentucky Governor Matt Bevin (pictured on the right) in Tuesday’s Election.  American Federation of State, County & Municipal Employees (AFSCME) President Lee Saunders, whose Union represents 1.4 million Members across the United States, issued this statement following very positive election results in both the States of Virginia and Kentucky: “Virginians have elected the most Worker-Friendly State Legislature in at least 25 years and Andy Beshear’s victory in Kentucky is an unmistakable rejection of a brand of politics – one of division and one that favors the wealthy and well-connected over hard-working people.  In both states, voters have cast their ballots for an agenda that puts Working Families first and gives Virginians and Kentuckians greater freedom to have a seat at the table and strengthen their communities.  These wins are further evidence of growing grassroots and political momentum in favor of Working People.  With a powerful wind at our backs, we will continue this momentum by working with these newly elected champions of Working People to raise wages and expand access to public services that make our communities stronger.”

It’s been almost three years since January 9th, 2017 when Republican Governor Matt Bevin signed the Right-To Work (for less) Law - which was rammed through the Legislature during the first week of the 2017 session with an “Emergency” Clause so that it would become law immediately upon being signed by Bevin.

It was claimed by Bevin, proponents in the Legislature, business interests and economic development specialists that passing Right-To-Work (for less) would open the flood gates to out-of-state and foreign investments in manufacturing and create huge numbers of high-paying manufacturing jobs.

It’s time to see if the “emergency” to enact Right-To-Work (for less) measures up to glorious claims of a Kentucky manufacturing jobs bonanza.

According to the U.S. Bureau of Labor Statistics (BLS) during the 32-month period beginning January 2017 when Bevin signed the Right-To-Work (for less) Legislation and August 2019, Kentucky’s manufacturing employment increased by a paltry 4,000 jobs - or just 1.6%.

Even more telling is the fact that during the 32-month period immediately prior to passage of Right-To-Work (for less) the BLS reports that 15,800 manufacturing jobs were created for an increase of 6.7%.

That’s four times as many new manufacturing created just prior to passage of Right-To-Work (for less)!

While claims of greatly increased manufacturing jobs was the public goal of Right-To-Work (for less), another less talked about goal is to create and stoke divisions in Unionized Workplaces by dividing Workers between those who pay Union Dues and those who do not yet reap the same wages, benefits and grievance procedures as those paying dues.

The obvious intent is to undermine or weaken Union Solidarity and the ability of Workers to undertake effective unified job actions to counterbalance management demands during negotiations, resulting in diminished bargaining leverage and less beneficial contracts.

Those hoping that Right-To-Work (for less) would have a deleterious impact on collective bargaining and Union Solidarity must be very disappointed since the occurrence of successful strikes and job actions in Kentucky are at their highest level in many years.

During the past two years Workers have gone on Strike at Oracle Packaging in Louisville, Kingsford Charcoal in Burnside, Four Roses Distillery in Lawrenceburg and Cox’s Creek, AT&T statewide and General Motors in Bowling Green and have stood together in solidarity to enforce their demands for fair Collective Bargaining Agreements.

Governor Bevin’s support for Right-To-Work (for less) makes clear his disdain for Unions and Workers alike.

His stalwart support for the interests of his wealthy business buddies should motivate all Workers to replace Matt Bevin with someone who understands and appreciates the value of Unions, collective bargaining and Workers’ Rights.

To Directly Access This Labor News Story, Go To: www.kentucky.com/opinion/op-ed/article236901363.html?fbclid=IwAR0ddFR9fLRoTrMViuifpdFtG8azLKgD0DfB5mEavfHJhRRZkvqLyw3QXBg