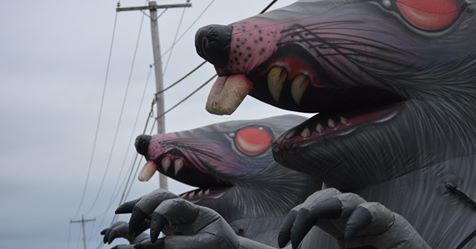 (WASHINGTON, D.C.) - Just about the only Worker protection the Trump-named Republican National Labor Relations Board (NLRB) majority hasn’t successfully banned, yet, is Scabby the Rat – but it’s not for lack of trying.  NLRB General Counsel Peter Robb, its top enforcement officer, wants to trap and kill Scabby too, the Economic Policy Institute (EPI) reports.  A Federal Judge in New York State stopped him, but Scabby’s fate is just a symbol.

In a comprehensive study of NLRB actions during the GOP Trump Government, the Pro-Worker Think Tank reports that, as might be expected, the three-member NLRB GOP majority is dismantling Worker Protections wholesale, working from – among other sources – a U.S. Chamber of Commerce wish list.

While individual Anti-Worker decisions of the Trump-named board majority have occasionally made headlines, the overall trend has not - until the EPI pulled it all together.  And it makes the point that unlike past GOP-run board’s this one wants to make the changes permanent, by enshrining them as Federal rules with the force of law.

“The NLRB ‘plans to go after more worker protections in the months ahead,’” they said, including, again, Scabby the Rat.

Taken together with the prior decades of all-out employer war on Unions, the NLRB’s concerted campaign could not only further weaken Union Strength in the U.S. – a top goal of the Chamber of Commerce, big business and the radical right – but could also further widen the income and wealth gap between the rich and the rest of us, EPI says.

Income Inequality hit a high in the depths of the Great Recession, EPI reported.

Union Density rose to one-third of Private Sector Workers in the mid-1950s and actually was higher than the Top 10%’s income share.

But even since then, Union Density has been on a slide, especially after 1981, and the Top 10%’s share starting rising just a year or two later.

“Since the 1970s, declining Unionization has fueled rising inequality and stalled economic progress for the American Middle Class,” the study authors explain.

But the Trump majority has taken a case-by-case dismantling of Workers’ Rights and converted it into wholesale systematic destruction.

“Under the Trump Administration, the National Labor Relations Board has systematically rolled back Workers’ Rights to form Unions and engage in collective bargaining with their employers, to the detriment of Workers, their communities, and the economy,” the EPI said.

To Continue Reading This Labor News Report, Go To: www.peoplesworld.org/article/epi-trump-majority-on-nlrb-systematically-dismantling-workers-protections/?fbclid=IwAR12BpKuIHIsYPfo-dKoKlIp2cGyzbBGTDZhp4Ht2azjpgpMMQr5Cdl53qE