IBEW President Lonnie Stephenson: Its One Thing To Run As Some Kind Of Guardian Of The Working Class, But The Record Speaks Louder Than Any Stump Speech. We Can Trust Our Own Eyes To Tell Us What Working Families Mean To This White House. 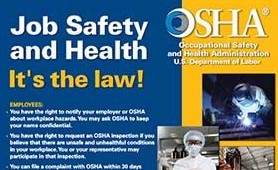 (WASHINGTON, D.C.) - The U.S. Occupational Safety and Health Administration (OSHA) has gutted an Obama-era rule that required employers to report on-the-job injuries and illnesses.  The Trump Administration’s new rule returns injury reports back into the darkness of corporate filing cabinets and makes it much more difficult for regulators and Safe Workplace Advocates to collect reliable data.

Sections of the Improve Tracking of Workplace Injuries and Illnesses were officially killed in January during the midst of the Nation’s longest government shutdown, when the Federal Government’s own Employees - including thousands of International Brotherhood of Electrical Workers (IBEW) Members - were forced to work without pay.

“This is the ‘latest attack on the wallets and safety’ of working Americans by this administration,” IBEW International President Lonnie Stephenson said. “It’s ‘one thing to run as some kind of guardian’ of the Working Class,’ but the record speaks louder than any stump speech: Attacks on pensions; Limits on who gets overtime; Delayed safety rules.’  ‘We can trust our own eyes to tell us what Working Families mean to this White House.’”

The now-eliminated portions of the standard required most employers to electronically submit detailed injury and illness reports to the agency each year (with individually identifying information removed).  The goal was to make it easier for Inspectors to focus resources at dangerous workplaces and let Public Health and Worker Safety Advocates find - and respond to - trends in workplace injuries.

Last year, the Trump Administration took steps to delay and then kill portions of the rule.

The portion of the standard that prevents employers from retaliating against Workers who report an injury has, so far, not been touched.

The administration’s justification was that the anonymized injury reports could be reverse-engineered to somehow identify the injured or ill Workers, violating their “privacy.”

“They couldn’t come up with who might want to do this, or why anyone would do this or even how it could be done,” the IBEW said. “It was disingenuous and nonsensical.”

In general, OSHA requires employers to maintain three kinds of records for reportable injuries and illnesses.  They have to keep a daily log that lists every event as it happens, a specific incident report that details how it happened and they have to create a more generalized annual summary of all incidents.

To Read This Labor News Story In Its Entirety, Go To: https://ucommblog.com/section/safety/trump-repeals-osha-safety-standards?fbclid=IwAR1QPjXYpL-1X2NtK5H2Jpf1UERkmY0-SCndC6Zg9rDdMzFyNNHi0TiKAo8