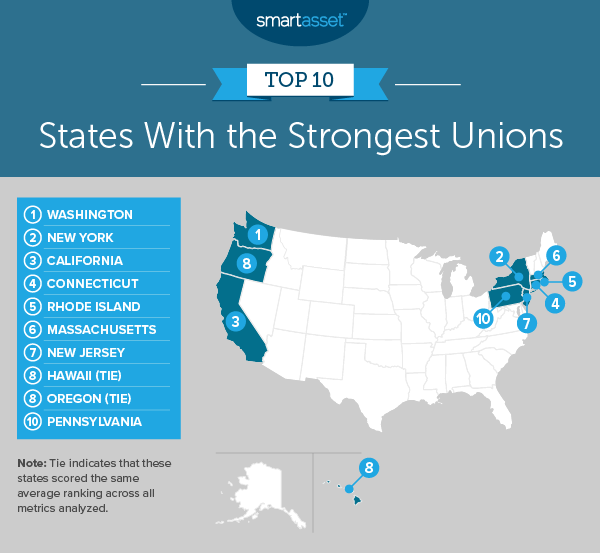 Unions can be effective tools for collective bargaining.

They represent Workers in negotiations with management to uphold Workers’ Rights, including fair wages.

According to a 2018 report on Full-Time Workers from the Bureau of Labor Statistics (BLS), Non-Union Workers earned just 82% of the median weekly amount that Union-represented Workers earned.

Being able to make a fair wage is necessary in order to budget properly and build up your savings account, but the power of Unions in the U.S. varies significantly across different locations.

Some states are Union Hotbeds, where Organized Labor is a major player in business and politics.

In other states, Unions don’t hold as much sway.

SmartAsset decided to see where Unions are the strongest.

We looked specifically at Teachers and Firefighters, because according to the BLS, the highest Unionization Rates among occupational groups in 2018 were in Protective Service Occupations (33.9%) and in Education, Training and Library Occupations (33.8%).

Our Key Findings - Unions are stronger on the coasts.  The East Coast populates the Top 10, with six states located in the Northeast.  The other four states in the top 10 are either on the West Coast or in the Pacific.  No states from the interior of the country are in the Top 10.  Unions are weaker in the South.  Eight of the bottom 10 states in our study in are in the South.  Many of them do particularly poorly in terms of number of Union Members and percentage of Workers belonging to a Union.

Here is our ranking:

To Continue Reading This Labor News Story, Go To: https://finance.yahoo.com/news/states-strongest-unions-2019-edition-110046904.html