The Chicago Teachers Strike Is Over After 15 Days, Ending The Longest Walkout Since 1987  The Five-Year Tentative Deal, Which Must Still Be Ratified By Membership, Features A Raise, Money To Hire More Staff & Enforcement Of Class Size Limits 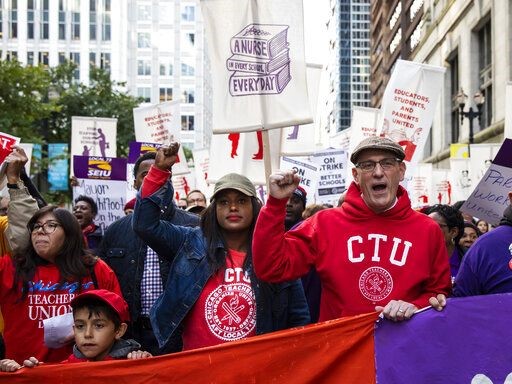 (CHICAGO, ILLINOIS) - Chicago Public Schools Teachers and students returned to the classroom this morning (Friday, November 1st) after a tentative agreement was reached with the Chicago Teachers Union (CTU) to end a 15-day Strike.

The CTU reached an agreement with the city Thursday (October 31st) - ending what has become the longest walkout since 1987.  The deal still needs to be ratified by CTU Membership and must be ratified within the next 10 school days to become official.

It was a long dispute - and in the end, the sticking point was make-up days.  Teachers said they wouldn't return to work unless all 11 missed school days of the Strike were made up and paid.  In a last minute deal, both sides settled on five days.

Getting that return to work deal only came after a one-on-one session between the mayor and CTU's President.

"In the interest of our students and our parents who have been suffering, it was important to me to make sure that we got our kids back in class.  Enough is enough and so, in the spirit of compromise, we agreed," Mayor Lori Lightfoot said.

"This has been tense the last two weeks, but it's not about me or the mayor, it's about the members of the Chicago Teachers Union," CTU President Jesse Sharkey said.

Fifteen days of the Strike earned Teachers a Nurse and Social Worker five days a week in every single school.

Mayor Lightfoot originally offered a 16% raise over five years.  The money and the length of the contract sticks, but there was considerable movement on CTU demands for more staffing, enforceable class sizes and other issues that have never been in a Chicago teachers' contract.

An additional 250 Nurses and more than 200 Social Workers will be hired, so every school will have a one of each by 2023.  The new contract also provides raises for Support Staff, such as Teachers' Aides and Clerks.  And, the deal includes $35 million for a committee to enforce class size limits.

To Read This Labor News Story In Its Entirety, Go To: https://abc7chicago.com/education/chicago-teachers-students-return-to-class-friday-as-15-day-strike-ends-/5663774/