One Transport Workers Union-Represented MTA Workers Told The New York Daily News: Were In A Billion-Dollar City And All We Want Is A Living Wage. We Could Stop The City If We Wanted To, And Maybe We Will. 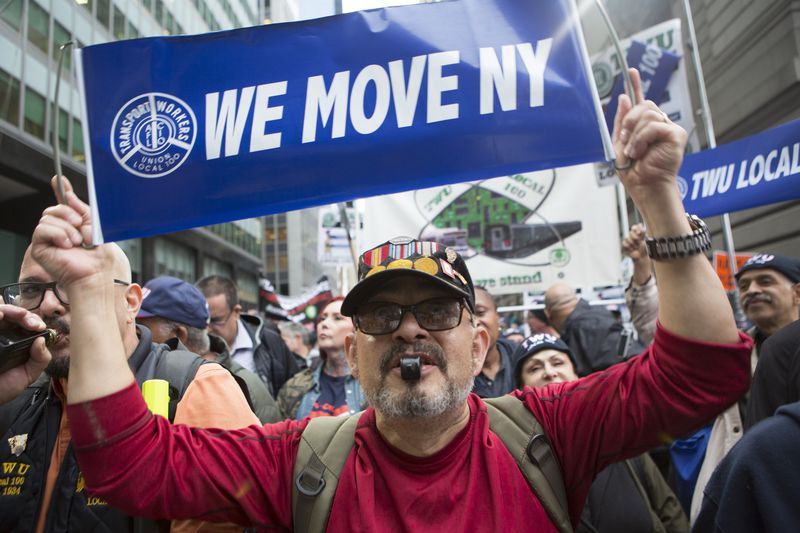 (NEW YORK CITY) - The Union that moves New York decided to slow things down a bit on Wednesday (October 30th) as thousands of Members from Transport Workers Union (TWU) Local 100 clogged the streets outside of the Metropolitan Transportation Authority’s (MTA) lower Manhattan headquarters for a massive rally that at times almost doubled as a music festival.  The Union set up an enormous stage in the middle of Broadway, complete with a band. The group had drums.  They had bullhorns.  They even had a man dressed up in a giant inflatable bear costume.  Despite the festivities, the Workers weren’t happy - and they said their angst is all due to difficult contract negotiations with the MTA.

“The message is simple,” Local 100 president Tony Utano told The Daily News. “Transit Workers are upset and angry.  We bailed the MTA out when the subway was failing.  We put it back together.”

Utano, who has worked in transit for 40 years, said the MTA “never seems has any money during contract time.”

The MTA and Local 100 have been without a contract since May 15th and negotiations between the two sides have since turned ugly.

In August, the MTA submitted a contract offer that Utano disparaged as “insulting.”  The offer would have required Workers to put in more than 40 hours in a given week to receive overtime. They now get overtime whenever they work more than eight hours a day.  The offer also would have cut health care benefits for Workers, and included a provision that would allow MTA Bosses to alter elements of the contract if too many Workers take too many days off.

The negotiations hit a new low earlier this month when MTA chairman Pat Foye sent a fiery e-mail to Utano, alleging him of running a “specialty drug scam."  The comment led one Union Official to threaten to “tar and feather” Foye at the rally.

Local 100′s Leaders said they are not officially planning a Strike, but several of them shouted to the crowd that they will “shut it down” if the MTA does not meet their demands.

They counted the crowd at roughly 5,000 Members, but said a late swell might have taken it up to 8,000 attendees.

“This is the biggest rally (Local 100) has ever had in my time here,” TWU International President John Samuelsen told The Daily News.

Samuelsen said the Union’s Members are at their wit’s end with the MTA.

While the Union is not legally allowed to go on Strike, the Workers could take things into their own hands if they don’t get a new contract soon, he noted.

“I don’t think Transit Workers are going to wait months for their fair shake,” said Samuelsen. “I think this situation will organically spin out of control and the Workers will say they’re done.”

To Continue Reading This Labor News Story, Go To: www.nydailynews.com/new-york/ny-twu-local-100-rally-broadway-20191030-clmoo6qmirfpnmflzjgix3rcka-story.html?fbclid=IwAR0sekJHIdj3IeFGHk5ovKXZuFZ9C_MQhbgvuFSGbSjN7lTuBJTdVeTbunA