UAW & Ford Reach A Tentative Contract Agreement: New Four-Year Deal With The UAW Includes $6 Billion In Investments & The Creation And Retention Of 8,500 Jobs - Union Recommends Ratification To Its Membership 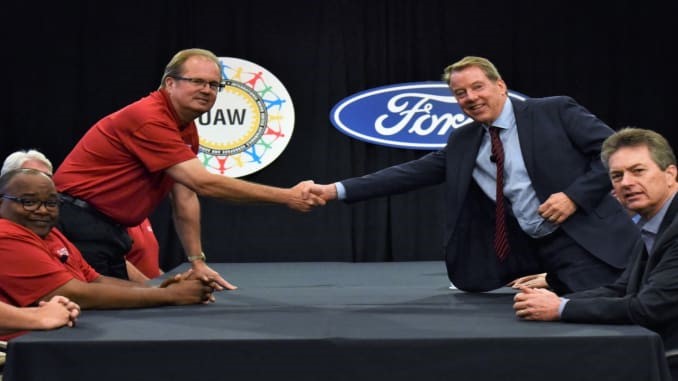 (DETROIT, MICHIGAN) – A Tentative Contract Agreement has been reached between the United Auto Workers (UAW) and the Ford Motor Company, UAW Officials announced late Wednesday (October 30th), which features $6 billion in investments to the Automaker’s U.S. facilities and the creation and retention of a combined 8,500 jobs.

“Our National Negotiators elected by their Local Unions have voted to recommend to the UAW-Ford National Council the proposed Tentative Agreement,” UAW Vice President Rory Gamble, who serves as Director of the Ford Department, said. “Our Negotiating Team worked diligently during the (just-concluded) General Motors Strike to maintain productive negotiations with Ford. The pattern bargaining strategy has been a very effective approach for UAW and its Members to secure economic gains around salary, benefits and secured over $6 billion in major product investments in American facilities, creating and retaining over 8,500 jobs for our communities.”

“These were long and hard hours, but I feel confident they were able to secure a contract that protects our Member’s future,” UAW President Gary Jones said.

If the UAW/Ford Members vote the deal down, negotiators would be expected to return to the bargaining table and a Strike would once again be an option for the Union.

The UAW, if the deal is ratified, would next turn its attention to Fiat Chrysler, the last of the Detroit Automakers the Union needs to negotiate with for 2019.

While no further details of the agreement were made public, the pact is expected to share many of the same terms as the Union’s recent contract with General Motors (GM) – which included 3% raises or 4% lump-sum bonuses in each year of the contract, retention of roughly 3% out-of-pocket health-care costs and a path for Temporary Workers to become Full-Time Employees.

GM also agreed to $11,000 ratification bonuses for most of its roughly 48,000 UAW-represented Employees.  However, previous contracts have included lower bonuses for Ford and Fiat Chrysler Workers.

Ford’s negotiations with the Union were expected to be less contentious and move more quickly than the UAW’s talks with GM, which included a 40-day Strike that ended late last week and cost the automaker billions.

To Continue Reading This Labor News Story, Go To: www.cnbc.com/2019/10/30/ford-reaches-tentative-labor-contract-with-uaw-avoids-union-strike.html?__source=sharebar|facebook&par=sharebar&fbclid=IwAR3r3SBZb8dm3XFp5TS_BNoavqSmzQM_nH8qfn0Hj-Qota0gfEPdUN1zHzA