Hey Union Members, Be Careful What You Post On Social Media: Michigan Radio Station Reports That Several UAW-Represented GM Employees Have Been Fired For Posts They Made During Their Just-Ended Strike 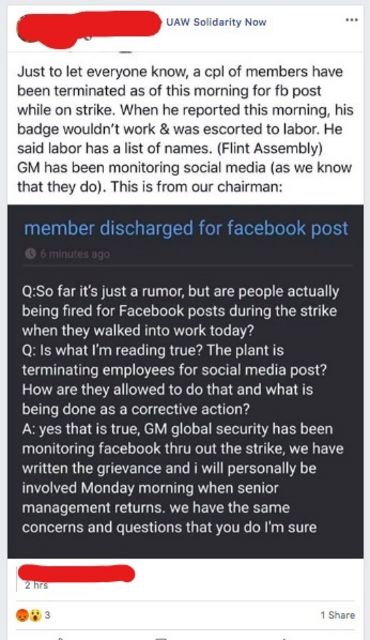 (FLINT, MICHIGAN) - Sources say several United Auto Workers (UAW) Members at two Flint facilities have been fired because of threatening posts they made on Social Media during the just-ended Strike.

Several members of UAW Local 598 were fired when they returned to work after the Strike due to violations of General Motors (GM) policies.

GM confirmed several Workers from the Flint Assembly plant have been fired due to company policy violations, but they didn't comment on specifics.

Union Officials say the same happened to Employees at a GM Customer Care and Aftersales Facility in the Flint area as well.

Sources say the posts by UAW Local 598 Members at Flint Assembly were regarding some violent incidents that happened on the picket line.

One post allegedly involved a Worker smashing out the windshield on vehicle near a picket line with two people inside.

UAW Local 659 President Steve Gruener couldn't comment on specifics of why his Members at Customer Care and Aftersales were terminated.

The firings come just three days after the UAW ratified a contract with GM.

Gruener said the situation should serve as a warning for all UAW Members.

Gruener said one of his Members reported for work at a Customer Care and Aftersales Facility over the weekend and got walked out by GM Global Security due to his actions during the Strike.  He said two more Workers were later walked out at the same facility.

Gruener could not comment specifically on what those workers did that warranted them getting fired, because an investigation is under way.

The UAW has filed grievances about the situations and they are waiting on a response from GM.

"It's very disappointing that after we've been on Strike for our contract for our Members that we come back to work and GM is still fighting that battle with harassing our Workers or suspending our Workers due to actions that happened during a Strike that really weren't associated with General Motors or from Social Media posts.  It's very disturbing for our Membership," Gruener said.

To Directly Access This Labor News Story, Go To: www.abc12.com/content/news/Several-GM-employees-fired-for-social-media-posts-during-strike-564002061.html?fbclid=IwAR17hqu7Sg__7iLEpiENgkluUeuoykKs1VCIRklniPubhe480Hqie0aYQek