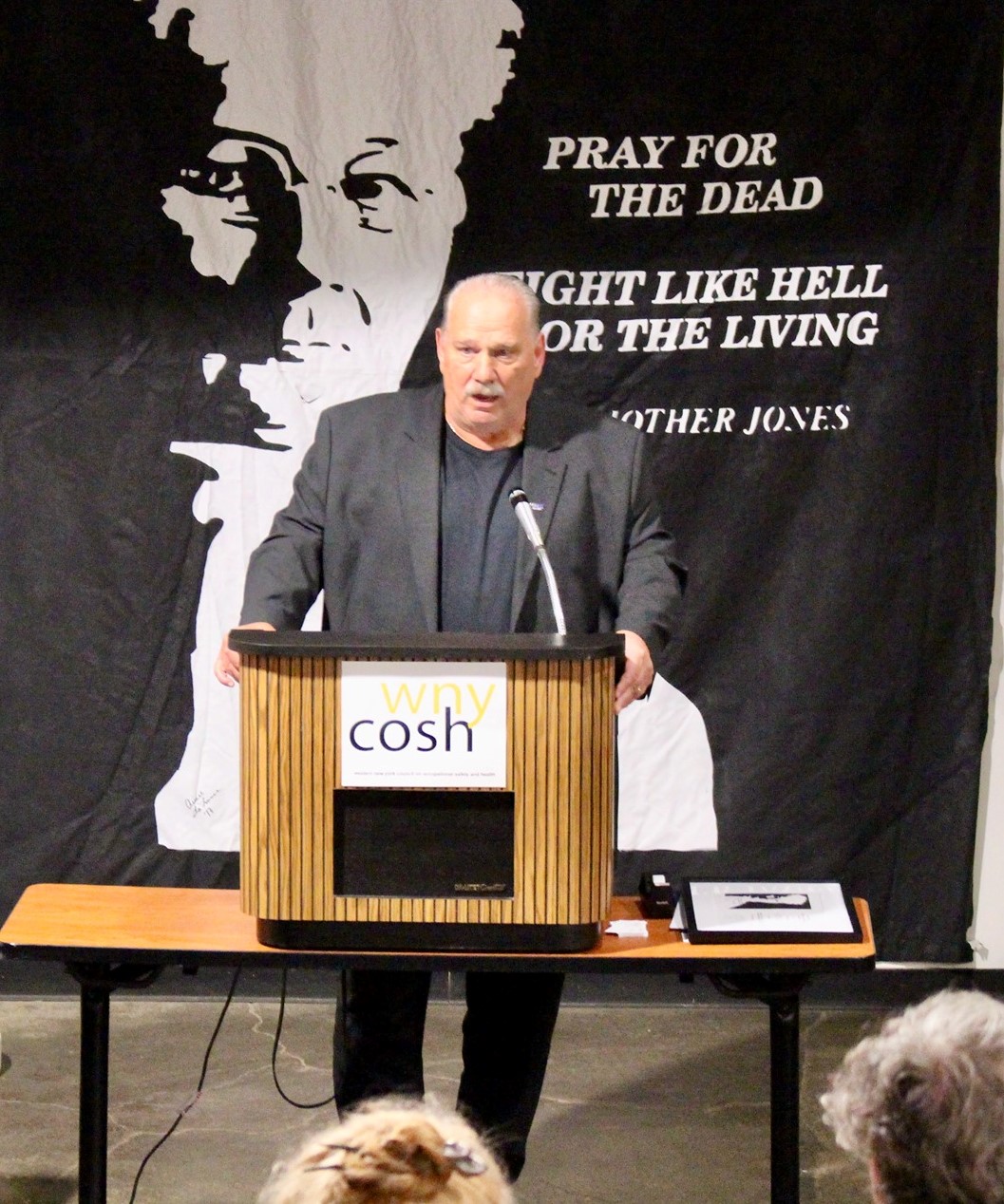 New York State Lt. Governor Kathy Hochul was among those notables in attendance during the reception that was held at the Tri-Main Building, where famed Photojournalist Earl Dotter (https://earldotter.com) was also honored.  In addition, Dotter presided over the opening of his exhibit, entitled: Life’s Work, A 50 Year Photographic Chronicle of Working in the U.S.A.

Those singled out by WNYCOSH (https://wnycosh.org/) included: Briggs; Lee Smith, the first Executive Director and one of the founders of WNYCOSH; Lou Jean Fleron, Director of the Cornell University ILR Buffalo Co-Lab; Louise Simon Schoene, NYARNG 342nd FSB Co C-, 9/11 Family Support Coordinator; and Mary Lister from the Ain’t I A Woman Campaign.

"Jim Briggs has been a 'leader' in fighting for Workplace Safety and Health since 1979 when he was President of OCAW (Oil, Chemical and Atomic Workers Union) at the Niagara Falls Goodyear Plant," WNYCOSH Executive Director Germain Harnden said.  "Jim fought to protect the Workers exposed to ortho-toluene.  And for the last forty years, he's never slowed down."

Briggs has been an outspoken and very public fighter for Worker safety across Western New York, standing up for the health of Workers employed in a variety of plants who work with and handle a variety of toxic chemicals and compounds on a daily basis.

“WNYCOSH has been a ‘great addition’ to Worker safety here in Western New York.  ‘I don’t have the words.’  ‘It is a tremendous honor.’  ‘I accept in on behalf of so many people who helped me to protect Workers on the job,’” Briggs (Pictured Above/WNYCOSH Photo) told WNYLaborToday.com prior to the event.

As a Steward and then President of his Oil, Chemical and Atomic Workers (OCAW) Local in 1979, Briggs was instrumental in uncovering information on high bladder cancers impacting Workers employed at the Goodyear Plant in Niagara Falls.  Working with his Union and Staff Attorneys, Briggs helped negotiate a settlement that guaranteed exposed Workers and Retirees would be monitored for the cancer four times a year.

“The ‘amount’ of bladder cancer ‘was alarming and I was lucky enough to be surrounded by good people’ (who more than adequately addressed the problem),” he told WNYLaborToday.com.  “And there was another bladder cancer situation at the local DuPont Plant with its Workers.  (DuPont) ‘knew about the cancer and did not tell us.’  A lawsuit ‘wound up with a lot of good changes at the plant and ($3million) in back pay to the Workers.’”

“From Workers’ exposure to toxic chemicals to repetitive injuries, I’ve been involved in ‘far too many’ (health and safety) situations in plants that can be counted (over the years),” continued Briggs - who went on to the Paper, Allied-Industrial, Chemical and Energy Workers International Union (PACE), which was merged into the USW in January 1999. 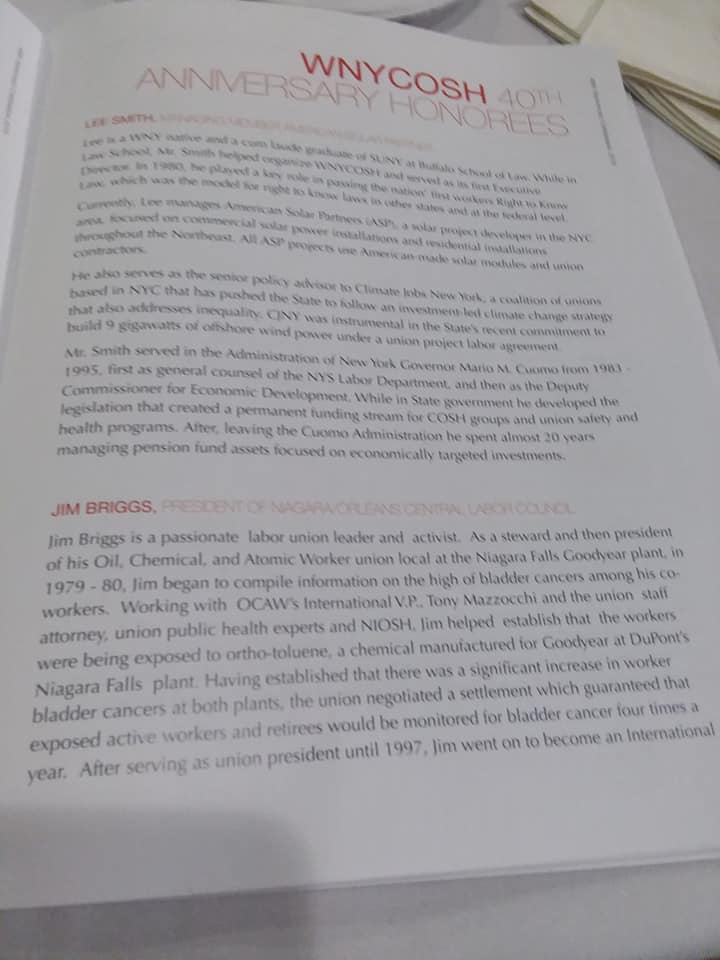 Briggs also took the time to single out his wife of 40 years, Bonnie, who he credited for “really allowing me to do” the job that he performs.  “It was (all done) ‘with the understanding of my wife and I really appreciate her support,’” he said.

WNYCOSH was founded in 1979 by a coalition of Organized Labor and Environmental and Public Health Activists, who joined forces to fight for safer workplaces and improved environmental conditions. WNYCOSH’s founding conference of more than 300 initially worked together to raise public awareness about toxic exposures and illnesses at the infamous Love Canal and at the Goodyear Plant in Niagara Falls.

Over the past 40 years, WNYCOSH - which has fought for significant Worker and Environmental Protective Legislation and trained hundreds of thousands of Workers, has continued to build its membership base and expanded it to many public health and legal professionals and individuals who are interested in occupational safety and health issues.

At the same time, WNYCOSH has empowered hundreds of thousands of Workers - including young Workers, Refugee and Immigrant Workers, Low-Wage Workers and Workers in high hazard industries through direct training to identify, evaluate and control hazards in the workplace.

Meanwhile, Photojournalist Dotter’s career began in documenting the Farmington Mine Disaster in 1968.  Since then, he has photographed work and workplace hazards around the world.

Dotter’s work was again brought to world-wide prominence with the release of the Mueller Report into Republican President Donald Trump, as a Russian Troll Farm had appropriated a well-known Dotter photo of black lung survivor in a pro-Trump poster. 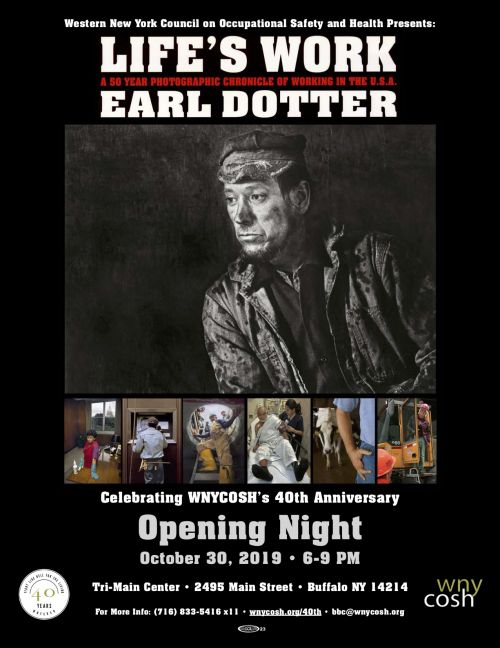 Working with WNYCOSH, Dotter is continuing to document work and workplace illnesses while in Buffalo.  He took the this week time to photograph former and local Bethlehem Steel Workers, 9/11 First Responders, Local Artists, Refugee Farmers, Workers at St. Joseph’s Suburban Buffalo Hospital and members of Communications Workers of America (CWA) 1168, among others.