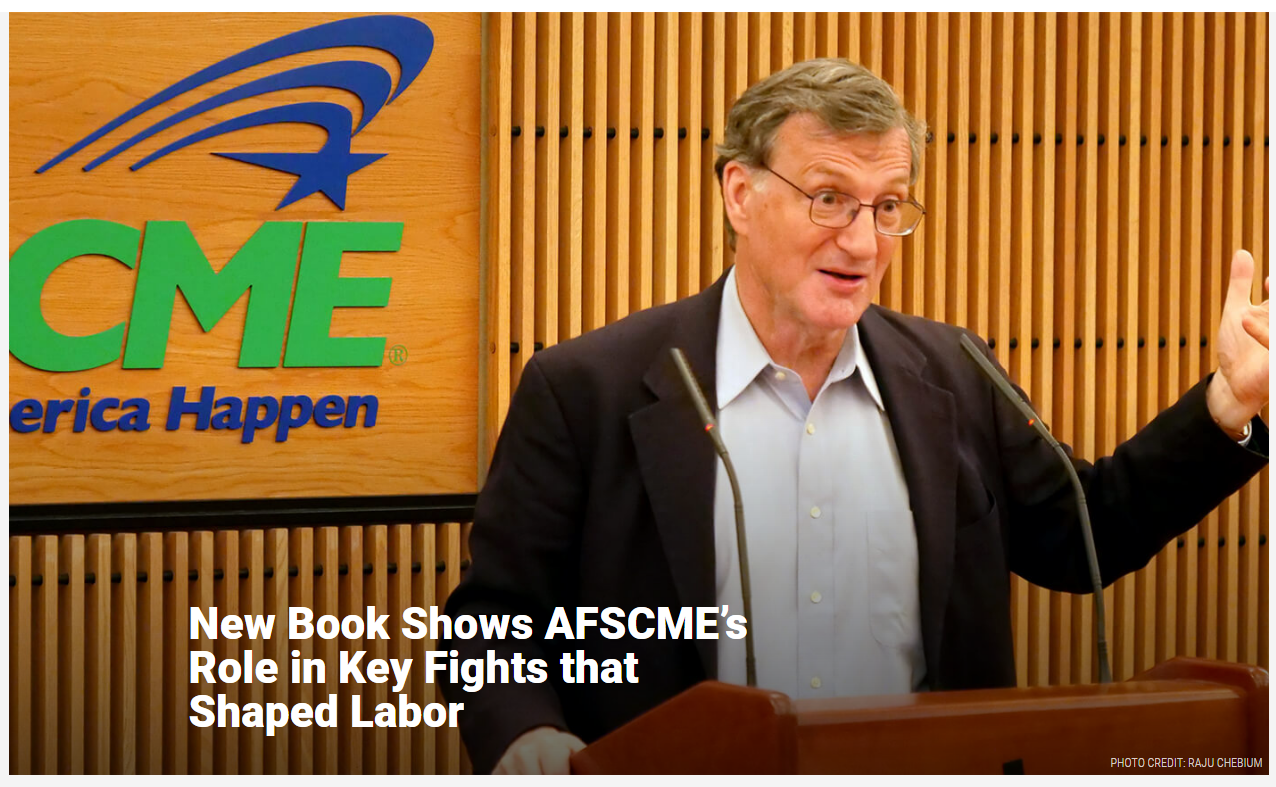 (WASHINGTON, D.C.) – Former New York Times Labor Reporter Steven Greenhouse’s new book, Beaten Down, Worked Up: The Past, Present, and Future of American Labor, is an account of Labor Unions and Worker Power in our country.

While it is not a comprehensive history of Organized Labor in America, it features key episodes that helped shape the Labor Movement, including victories and setbacks for Workers.

Among those key episodes are two in which the American Federation of State, County & Municipal Employees (AFSCME) features prominently: The Memphis Sanitation Workers’ Strike of 1968 and the unsuccessful fight in 2011 to stop Republican Wisconsin Governor Scott Walker from taking away Collective Bargaining Rights in the Public Sector.

As this review of his book points out, he “probably knows more about what is happening in the American workplace than anybody else in the country.”

Recently, Greenhouse - who was on the Labor beat for nearly two decades with The Times, visited AFSCME International to talk about his book and the future of Organized Labor.

The overall picture that emerges from Greenhouse’s book is of a Labor Movement diminished in strength - but potentially on the mend.

“When the Labor Movement was robust, we as a Nation moved toward greater economic and social justice, but with the Union Movement diminished - and with many billionaires and corporations seeking to cripple it further - we as a Nation are moving toward more inequality and unfairness,” Greenhouse writes.

Nevertheless, there are reasons for hope.

Union popularity among the General Public is at its highest in 50 years, with nearly two out of three Americans approving of Unions.

Moreover, nearly half of Non-Unionized Workers say they would join a Union if given the opportunity.

And - there has been a resurgence of Worker Activism since 2018.

Last year, the number of Workers who participated in sizable Strikes reached almost half a million, the largest since 1986.

And when Workers mobilize and stand up to defend their rights and dignity, they tend to inspire others to do the same.

And - Worker issues are front and center in the 2020 general election.

In his 19 years covering the Labor Movement, Greenhouse said, he’d never seen so much importance given to Worker issues by Presidential Candidates as reflected today in the current crop of Democratic candidates’ Labor Platforms.

To describe AFSCME’s key role in the history of Labor, Greenhouse interviewed AFSCME Members past and present, including Elmore Nickleberry, a former Sanitation Worker in Memphis and one of the original Members of AFSCME Local 1733, and Paul Spink, the President of the newly unified AFSCME Council 32 in Wisconsin and an AFSCME International Vice President.

“If we didn’t have a Union, we would get nothing,” Greenhouse quotes Nickleberry as saying. “We’d be in the same shape as before.  You got a Union to back you, you achieve more.  The more people you have in a Union, the more you get.  They can talk for you more than you can talk for yourself.”

To Directly Access This Labor News Story, Go To: www.afscme.org/now/new-book-shows-afscmes-role-in-key-fights-that-shaped-labor