Adjunct Professors Go Union At St. Petersburg College - Become The Seventh Group In The State Of Florida To Join SEIU In Recent Years 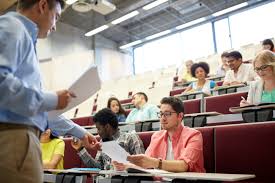 (ST. PETERSBURG, FLORIDA) - Adjunct Faculty at St. Petersburg College have voted to Unionize, joining thousands of Educators across the State of Florida in the fight for better pay and working conditions.

About half of the school’s 865 Adjuncts voted, with 269 in favor and 187 opposed, according to the Public Employment Relations Commission (PERC).

St. Petersburg College Employees are the seventh group in Florida to join Service Employees International Union (SEIU), which is on track to represent about 9,500 Adjuncts statewide - including those at the University of South Florida and Hillsborough Community College.

Adjuncts teach the majority of classes at the school, yet struggle to afford basic expenses, he added.

Joining the Union will "ensure that Adjunct Faculty can earn a living, while providing students a great education.”

She was confident from the start.

“The whole time, I just had this feeling that we could do it,” she said. “That kept me fighting.”

Like Adjuncts elsewhere in Florida, those at St. Petersburg College have concerns about low pay and lack of Employee Benefits, like health insurance, Edwards-Luckett said.

One of her colleagues works part-time at Walmart just to make ends meet, she added.

Others “take on as many classes as they can," she said.

The group formally filed to Unionize in December.  Some pushback came in May, when St. Petersburg College president Tonjua Williams sent an e-mail warning Faculty of the “consequences” of a Union, like dues and new ways of work.

It was both “exciting and nerve-wracking” to watch votes be tallied, Edwards-Luckett said, but relief washed over her when the count was final.

“We came out victorious," she said. “We’re just proud to join the ranks of other institutions in Florida higher education ‘who also voted yes to Unions.’”

To Directly Access This Labor News Story, Go To: www.tampabay.com/news/gradebook/2019/10/22/adjunct-professors-unionize-at-st-petersburg-college/?fbclid=IwAR01YMYYcyku22ZMP6okuKcM9PpO8ZMTvl-nhrTxcx6Rv0SY5y1L967N99Y