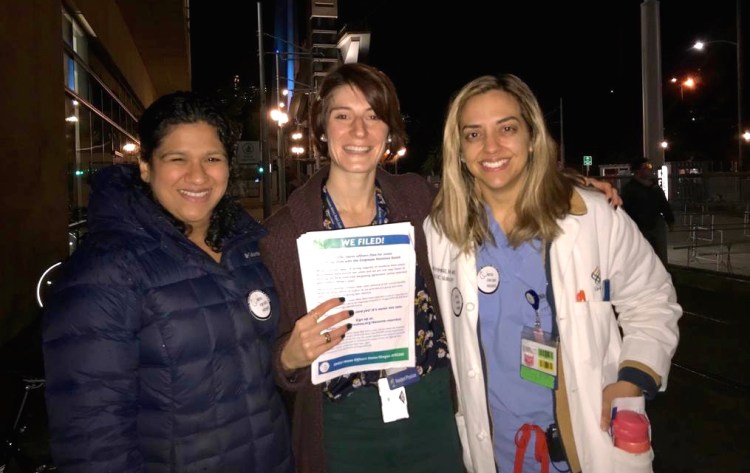 (PORTLAND, OREGON) - About 830 Physicians are going to Unionize at the Oregon Health and Science University (OHSU) in Portland.  In mid-October, Oregon American Federation of State, County & Municipal Employees (AFSCME) turned in Union Authorization Cards signed by a majority of the group.  The union will become official after the Oregon Employment Relations Board (OERA) checks the cards against a list provided by the university.

The new unit consists of Medical Interns, Residents and Fellows, known collectively as “House Officers” within their profession.  Having earned Doctoral Degrees, House Officers treat patients under the supervision of “attending Physicians.”  It’s the final stage of their training before they become licensed to practice medicine as a Physician.  In their first year, House Officers are known as Interns, and in subsequent years they’re known as Residents.  Fellows are those who’ve completed a residency and are continuing training in a sub-specialty.

OHSU House Officer Justine Hum is near the end of a three-year fellowship in gastroenterology after a three-year residency in internal medicine.  Hum, 32, says she feels lucky to be in the program and finds OHSU a fantastic place to work.  “But anything can be improved,” Hum said. “Residents work really hard and having more benefits and protections can only make us a stronger program.”

House Officers are typically the first Doctors a patient sees.  They examine a patient and make a recommendation about treatment to the attending Physician, but they work for salaries far below that of a Licensed Physician; $60,000 a year is typical and they may be carrying $200,000 in medical school debt.  House Officers also work legendarily long hours - up to 80 hours a week, with shifts that can last up to 24 hours.

That doesn’t leave a lot of time to go to Union planning meetings.

At OHSU, Hum says the Union Campaign began over the Summer and spread via long text message conversations.

House Officers determined they wanted to Unionize and reached out to AFSCME because it represents similar units elsewhere.

OHSU is one of the last teaching hospitals on the West Coast where house Officers hadn’t Unionized.

At schools like UCLA, University of Washington, House Officers Unionized and won a number of improvements, including increased living stipends, meal money, and payment of licensing fees.

In Union Contract Bargaining, OHSU House Officers may push for those things and more, like on-call rooms that are closer to where they practice and better health insurance.

To Directly Access This Labor News Story, Go To: https://nwlaborpress.org/2019/10/physicians-in-training-unionize-at-ohsu/?fbclid=IwAR1HRHlCqsNB1N4Cqo-sYfW5vrlw4Tg9DJ0gXihE9o0Ex5_ESSEsnH2Ac5E